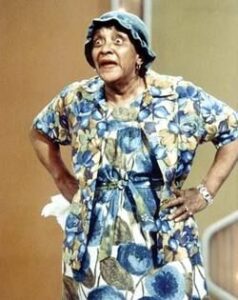 Loretta Mary Aiken (Jackie “Moms” Mabley), stand-up comedienne, was born in Brevard, North Carolina. At the age of 15, Mabley ran away to Cleveland, Ohio with a travelling minstrel show where she began singing and entertaining. By the 1950s, she was one of the top women doing stand-up and earning $10,000 per week at the Apollo Theater.

In 1962, she played Carnegie Hall and appeared on a number of television shows. Mabley was billed as “The Funniest Woman in the World” and she recorded more than 20 albums of comedy routines, including “Moms Mabley at the UN” (1961) and “Moms Mabley Breaks It UP” (1962).