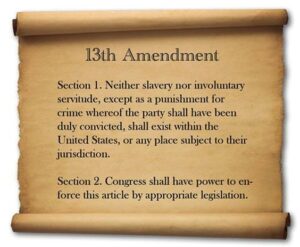 March 16, 1995 Mississippi became the last state to ratify the Thirteenth Amendment to the United States Constitution which abolished and continues to prohibit slavery and involuntary servitude, except as a punishment for a crime. The amendment was actually adopted on December 6, 1865 when it was ratified by the Georgia state legislature, the 27th of the then 36 states.