Trending
You are at:Home»365 DAYS-OF-HISTORY»March 14 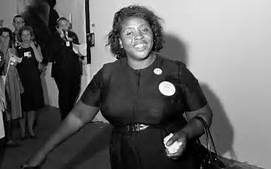 March 14, 1977 Fannie Lou Townsend Hamer, voting rights activist and civil rights leader, died. Hamer was born October 6, 1917 in Sunflower, Mississippi. In 1961, without her knowledge or consent, Hamer was sterilized by a white doctor as part of the state of Mississippi’s plan to reduce the number of poor blacks in the state. In 1962, she began working with the Student Nonviolent Coordinating Committee (SNCC) to register African Americans to vote. In the summer of 1964, the Mississippi Freedom Democratic Party was organized to challenge Mississippi’s all-white and anti-civil rights delegation to the Democratic National Convention and Hamer was elected vice chairperson.

Although their efforts were unsuccessful that year, they did cause the Democratic Party to adopt a clause which demanded equality of representation from their state’s delegation in 1968 and Hamer was seated as a member of Mississippi’s delegation to the convention that year. Hamer’s tombstone reads “I am sick and tired of being sick and tired.” There are several biographies of Hamer, including “Fannie Lou Hamer: From Sharecropping to Politics” (1990) and “This Little Light of Mine: the Life of Fannie Lou Hamer” (1993). Hamer’s name is enshrined in the Ring of Genealogy at the Charles H. Wright Museum of African American History in Detroit, Michigan.