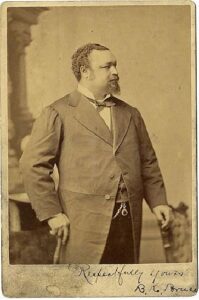 Blanche Kelso Bruce, the first elected African American United States senator to serve a full term, was born enslaved in Prince Edward County, Virginia. Because his father was white, he was able to legally free Bruce and arrange for a trade apprenticeship.

In 1864, Bruce moved to Missouri where he established a school for blacks and during the Reconstruction Period became a wealthy landowner in the Mississippi Delta. Over the years, he won elections in Bolivar County, Mississippi to sheriff, tax collector, and supervisor of education. In 1874, he was elected by the state legislature to the U. S. Senate where he served until 1881.

In 1881, Bruce was appointed by President James Garfield to be Register of the Treasury, making him the first African American whose signature appeared on United States paper currency. Bruce served on the Board of Trustees of Howard University from 1894 to his death on March 17, 1898.

His home in Washington, D. C. was declared a National Historic Landmark in 1975 and the Blanche Kelso Bruce Academy School District in Detroit, Michigan is named in his honor. An account of Bruce’s political life and that of his descendents is given in “The Senator and the Socialite: The True Story of America’s First Black Dynasty” (2006).