Trending
You are at:Home»365 DAYS-OF-HISTORY»June 6 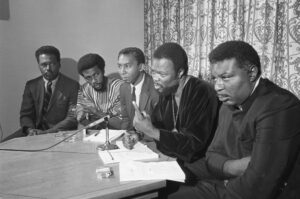 June 6, 1934 Roy Emile Alfredo Innis, civil rights activist and National Chairman of the Congress of Racial Equality, was born in the U.S. Virgin Islands but raised in New York City. From 1950 to 1952, Innis served in the U.S. Army and from 1952 to 1956 attended the City College of New York. Innis joined the Harlem chapter of the Congress of Racial Equality in 1963 and in 1965 was elected chairman of the chapter. In 1967, he was elected second national vice-chairman of CORE. Also that year, Innis was made the first executive director of the Harlem Commonwealth Council, an investment corporation established to create financial independence and stability in Harlem. Innis was elected national chairman of CORE in 1968 and continues to hold that position. He also was founder and co-editor of the Manhattan Tribune Newspaper. Since the 1980s, Innis has unsuccessfully run for several political offices.