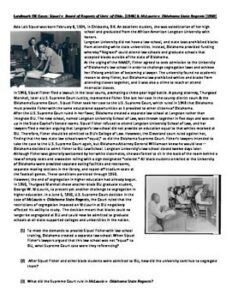 McLaurin v. Oklahoma State Regents, 339 U.S. 637 (1950), was a United States Supreme Court case that reversed a lower court decision upholding the efforts of the state-supported University of Oklahoma to adhere to the state law requiring African-Americans to be provided graduate or professional education on a segregated basis.

The plaintiff, George W. McLaurin, who already had a master’s degree in education, was first denied admission to the University of Oklahoma to pursue a Doctorate in Education degree. McLaurin successfully sued in the US District Court for the Western District of Oklahoma to gain admission to the institution (87 F. Supp. 526; 1948 U.S. Dist.) basing his argument on the Fourteenth Amendment.

At the time, Oklahoma law prohibited schools from instructing blacks and whites together. The court found that the university’s inaction in providing separate facilities, in order to meet Oklahoma state law, allowing McLaurin to attend the institution was a violation of his Constitutional rights. However, the court did not issue any injunctive relief as requested by the plaintiff but rather relied “on the assumption that the law having been declared, the State will comply.”

The University admitted McLaurin but provided him separate facilities, including a special table in the cafeteria, a designated desk in the library, and a desk just outside the classroom doorway.

McLaurin returned to the US District court and petitioned to require the University of Oklahoma to remove the separate facilities allowing him to interact with the other students fully (87 F. Supp. 528; 1949 U.S. Dist.) The court denied McLaurin’s petition.

McLaurin then appealed to the US Supreme Court. On June 5, 1950, the United States Supreme Court ruled that a public institution of higher learning could not provide different treatment to a student solely because of his/her race as doing so deprived the student of his/her Fourteenth Amendment rights of Equal Protection.

Accordingly, the high court reversed the decision of the US District Court, requiring the University of Oklahoma to remove the restrictions under which McLaurin was attending the institution. This case together with Sweatt v. Painter, which was decided the same day, marked the end of the separate but equal doctrine of Plessy v. Ferguson in graduate and professional education.