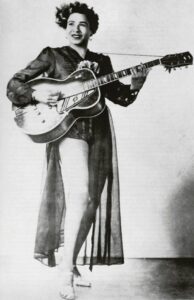 Lizzie Douglas (June 3, 1897 – August 6, 1973), known as Memphis Minnie, was a blues guitarist, vocalist, and songwriter whose recording career lasted from the 1920s to the 1950s. She recorded around 200 songs, some of the best known being “Bumble Bee”, “Nothing in Rambling”, and “Me and My Chauffeur Blues”.

Douglas was born on June 3, 1897, in Algiers, Louisiana. She was the eldest of 13 siblings. Her parents, Abe and Gertrude Douglas, nicknamed her Kid when she was young, and her family called her that throughout her childhood. It is reported that she disliked the name Lizzie. When she first began performing, she played under the name Kid Douglas.

When she was 7, she and her family moved to Walls, Mississippi, south of Memphis. The following year she received her first guitar, as a Christmas present. She learned to play the banjo by the age of 10 and the guitar by the age of 11, when she started playing at parties. The family later moved to Brunswick, Tennessee. After Minnie’s mother died, in 1922, Abe Douglas moved back to Walls, where he died in 1935.

In 1910, at the age of 13, she ran away from home to live on Beale Street, in Memphis. She played on street corners for most of her teenage years, occasionally returning to her family’s farm when she ran out of money. Her sidewalk performances led to a tour of the South with the Ringling Brothers Circus from 1916 to 1920.

She then went back to Beale Street, with its thriving blues scene, and made her living by playing guitar and singing, supplementing her income by prostitution (at that time, it was not uncommon for female performers to work as prostitutes out of financial need).
She began performing with Joe McCoy, her second husband, in 1929.

They were discovered by a talent scout for Columbia Records, in front of a barber shop, where they were playing for dimes. She and McCoy went to record in New York City and were given the names Kansas Joe and Memphis Minnie by a Columbia A&R man. Over the next few years she and McCoy released a series of records, performing as a duet.

In February 1930 they recorded the song “Bumble Bee” for the Vocalion label, which they had already recorded for Columbia but which had not yet been released. It became one of Minnie’s most popular songs; she eventually recorded five versions of it. Minnie and McCoy continued to record for Vocalion until August 1934, when they recorded a few sessions for Decca Records. Their last session together was for Decca, in September. They divorced in 1935.

An anecdote from Big Bill Broonzy’s autobiography, Big Bill Blues, recounts a cutting contest between Minnie and Broonzy in a Chicago nightclub on June 26, 1933, for the prize of a bottle of whiskey and a bottle of gin. Each singer was to sing two songs; after Broonzy sang “Just a Dream” and “Make My Getaway,” Minnie won the prize with “Me and My Chauffeur Blues” and “Looking the World Over”.

Paul and Beth Garon, in their biography Woman with Guitar: Memphis Minnie’s Blues, suggested that Broonzy’s account may have combined various contests at different dates, as these songs of Minnie’s date from the 1940s rather than the 1930s.

By 1935 Minnie was established in Chicago and had become one of a group of musicians who worked regularly for the record producer and talent scout Lester Melrose. Back on her own after her divorce from McCoy, Minnie began to experiment with different styles and sounds.

She recorded four sides for Bluebird Records in July 1935, returned to the Vocalion label in August, and then recorded another session for Bluebird in October, this time accompanied by Casey Bill Weldon. By the end of the 1930s, in addition to her output for Vocalion, she had recorded nearly 20 sides for Decca and eight sides for Bluebird. She also toured extensively in the 1930s, mainly in the South.