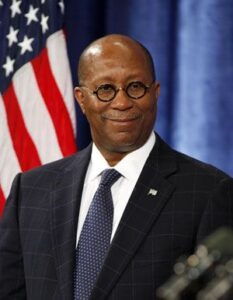 Ronald Kirk (born June 27, 1954) is an American lawyer, politician and member of the Democratic Party. He was born in Austin, Texas, Kirk is a graduate of Austin’s John H. Reagan High School, Austin College, and the University of Texas School of Law.

From 1994 to 1995, Kirk worked as the Secretary of State of Texas, until he was elected as the Mayor of Dallas, where he served from 1995 to 2002 and was the first African-American to hold either of those positions. He ran for the United States Senate in 2002, but was defeated by Republican opponent John Cornyn.

After his defeat, Kirk worked as a partner at the Houston-based law firm Vinson & Elkins and worked as a lobbyist for Energy Future Holdings and Merrill Lynch.

Kirk was nominated by President Barack Obama to serve as U.S. Trade Representative and on March 18, 2009, and was confirmed by the U.S. Senate in a 92–5 confirmation vote. On January 22, 2013, Kirk announced that he would be stepping down as U.S. Trade Rep.

Born in Austin, Texas, Kirk is the youngest of four children; his father was a U.S. postal worker and the family was politically active. He grew up in a predominantly black community, and attended Austin’s public schools. He was a leader in high school, and was elected student council president in his senior year at John H. Reagan High School (Austin, Texas).

Kirk attended Austin College, graduating with a degree in both political science and sociology in 1976. He then went to the University of Texas School of Law. Upon receiving his Juris Doctor in 1979, he practiced law until 1981 when he left to work in the office of then-Texas Senator Lloyd Bentsen.

In 1983, Kirk returned to Texas to lobby the state legislature in Austin, first as an attorney with the city of Dallas, and later with a law firm.

In 1994, Kirk worked for then-Texas Governor Ann Richards as Secretary of State of Texas. The following year, Kirk ran for mayor of Dallas.

With support of Dallas’ business community and influential members of the city’s African American community, Kirk was successful in his bid and became the first African American mayor of Dallas, Texas, while winning 62 percent of the total vote.

During his tenure as mayor, Kirk earned the reputation of being a coalition-builder, managing to keep the always-tumultuous Dallas City Council and Dallas School Board together.

Under his leadership, he proposed the “Dallas Plan”, a vision for the next 25 years, which included the controversial Trinity River Project, a $246 million plan that called for constructing a network of parks and highways in the flood plain of the Trinity River. He also pushed the construction of the American Airlines Center, whose opening he oversaw in 2002.

In 1999, Kirk was re-elected as mayor of Dallas in a landslide with 74 percent of the vote. The only incident in the campaign was a radio campaign ad that used music from Star Trek and described Kirk as the “captain of the Dallas Enterprise”, citing the city’s bond program, the new sports arena and new roads. The ad was pulled after Paramount’s lawyers sent a cease-and-desist letter.

In 2001, Kirk resigned as mayor of Dallas in order to run for the Senate seat vacated by retiring Republican Phil Gramm. Facing then-Texas Attorney General John Cornyn; Kirk lost with 43 percent of the vote to Cornyn’s 55 percent.

Following his failed bid for Senate, Kirk returned to the law firm of Gardere Wynne Sewell in Dallas. He was briefly a candidate for chairman of the Democratic National Committee after the 2004 election. Later he was a partner with the Houston-based law firm Vinson and Elkins, where, according to Texans for Public Justice, he was, as of March 2007, one of the four highest paid lobbyists for Energy Future Holdings Corporation.

During the Democratic National Convention, Kirk came out in favor of establishing the U.S. Public Service Academy as a civilian counterpart to the military service academies. Although there was speculation that Kirk would be appointed Secretary of Transportation by President Barack Obama, he was given the position of Trade Representative.

As a supporter of the North American Free Trade Agreement (NAFTA), his selection has drawn criticism from advocates of fair and equitable trade policies. His nomination ran into further controversy when it was revealed that he owed $9,975 in back taxes. As compensation for speeches he gave from 2004 to the present, he had $37,750 of payments made directly to a scholarship fund at Austin College. Kirk should have included the $37,750 payments with his gross income and then claimed a charitable deduction for the same amount.

Kirk also claimed deductions for three years of season tickets to the Dallas Mavericks as qualifying entertainment expenses. In order to claim a qualifying entertainment expense, the Internal Revenue Service requires written documentation of the time, place, business purpose, name, and business relationship of the person being entertained, records that Kirk did not keep for almost half of the basketball games. Kirk’s deductions for tax and accounting fees were also too large.

The U.S. Senate confirmed Kirk as United States Trade Representative on March 18, 2009, with a vote of 92 in favor and five opposed and he was sworn in the same day. Kirk was formally sworn in by Vice President Joe Biden on March 20, 2009. Kirk is the first person of African American descent to hold the position of United States Trade Representative.