Trending
You are at:Home»365 DAYS-OF-HISTORY»June 23 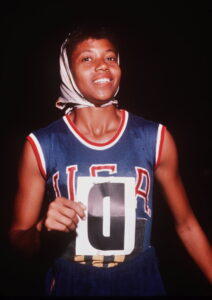 June 23, 1940 Wilma Glodean Rudolph, the first American woman to win three Gold medals in track and field during a single Olympic Games, was born in Clarksdale, Tennessee. Despite a childhood filled with medical problems, Rudolph became an accomplished athlete by high school. In high school, she was a basketball star, setting state records for scoring and leading her team to the state championship. At 16, she was a member of the United States track and field team which won a Bronze medal in the 4 x 100 meter relay at the 1956 Melbourne Olympic Games. At the 1960 Rome Olympic Games, Rudolph won Gold medals in the 100 meter race, the 200 meter race, and the 4 x 100 meter relay. That same year, she was the United Press Athlete of the Year and Associated Press Woman Athlete of the Year. In 1961, she was the Associated Press Woman Athlete of the Year and won the James E. Sullivan Award as the top amateur athlete in the United States. Rudolph was inducted into the USA Track & Field Hall of Fame in 1974, the U.S. Olympic Hall of Fame in 1983, and the National Women’s Hall of Fame in 1994. Rudolph died November 12, 1994 and in 2004 the United States Postal Service issued a commemorative postage stamp in recognition of her accomplishments. The Women’s Sports Foundation’s Wilma Rudolph Courage Award is presented annually “to a female athlete that exhibits extraordinary courage in her athletic performance, demonstrates the ability to overcome adversity, makes significant contributions to sports and serves as an inspiration and role model to those who face challenges, overcome them and strives for success at all levels.” A life size bronze statue of Rudolph is located in her hometown of Clarksdale. A number of biographies of Rudolph have been published, including “Wilma Rudolph: The Greatest Woman Sprinter in History” (2004) and “Wilma Rudolph: A Biography.” Also, the 1977 made for television movie “Wilma” was about her life.