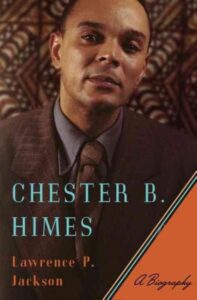 Chester Bomar Himes (July 29, 1909 – November 12, 1984) was a black American writer. His works include If He Hollers Let Him Go and the Harlem Detective series. In 1958 he won France’s Grand Prix de Littérature Policière.

Chester Himes was born in Jefferson City, Missouri, on July 29, 1909, to Joseph Sandy Himes and Estelle Bomar Himes; his father was a peripatetic black college professor of industrial trades and his mother was a teacher at Scotia Seminary prior to marriage; Chester Himes grew up in a middle-class home in Missouri.

When he was about 12 years old, his father took a teaching job in the Arkansas Delta at Branch Normal College (now University of Arkansas at Pine Bluff), and soon a tragedy took place that would profoundly shape Himes’s view of race relations. He had misbehaved and his mother made him sit out a gunpowder demonstration that he and his brother, Joseph Jr., were supposed to conduct during a school assembly.

Working alone, Joseph mixed the chemicals; they exploded in his face. Rushed to the nearest hospital, the blinded boy was refused treatment because of Jim Crow laws. “That one moment in my life hurt me as much as all the others put together,” Himes wrote in The Quality of Hurt.

I loved my brother. I had never been separated from him and that moment was shocking, shattering, and terrifying….We pulled into the emergency entrance of a white people’s hospital. White clad doctors and attendants appeared. I remember sitting in the back seat with Joe watching the pantomime being enacted in the car’s bright lights. A white man was refusing; my father was pleading. Dejectedly my father turned away; he was crying like a baby. My mother was fumbling in her handbag for a handkerchief; I hoped it was for a pistol.

The family later settled in Cleveland, Ohio. His parents’ marriage was unhappy and eventually ended in divorce. Himes’s family left Pine Bluff and relocated to Cleveland, Ohio, where he attended East High School. He attended Ohio State University in Columbus, Ohio, where he became a member of Alpha Phi Alpha fraternity, but was expelled for playing a prank.

In late 1928 he was arrested and sentenced to jail and hard labor for 20 to 25 years for armed robbery and sent to Ohio Penitentiary. In prison, he wrote short stories and had them published in national magazines. He stated that writing in prison and being published was a way to earn respect from guards and fellow inmates, as well as to avoid violence.

His first stories appeared in 1931 in The Bronzeman and, starting in 1934, in Esquire. His story “To What Red Hell” (published in Esquire in 1934) as well as to his novel Cast the First Stone – only much later republished unabridged as Yesterday Will Make You Cry (1998) – dealt with the catastrophic 1930 prison fire Himes witnessed at Ohio Penitentiary in 1930.

In 1934 Himes was transferred to London Prison Farm and in April 1936 was released on parole into his mother’s custody. Following his release he worked at part-time jobs while continuing to write. During this period he came into contact with Langston Hughes, who facilitated Himes’s contacts with the world of literature and publishing.

In 1936 Himes married Jean Johnson. In the 1940s Himes spent time in Los Angeles, working as a screenwriter but also producing two novels, If He Hollers Let Him Go and The Lonely Crusade, that charted the experiences of the wave of black in-migrants, drawn by the city’s defense industries, and their dealings with the established black community, fellow workers, unions and management. He also provided an analysis of the Zoot Suit Riots for The Crisis, the magazine of the NAACP.

Mike Davis in City of Quartz: Excavating the Future of Los Angeles, describing the prevalence of racism in Hollywood in the 1940s and ’50s, cites Himes’ brief career as a screenwriter for Warner Brothers, terminated when Jack L. Warner heard about him and said: “I don’t want no niggers on this lot.” Himes later wrote in his autobiography.

Up to the age of thirty-one I had been hurt emotionally, spiritually and physically as much as thirty-one years can bear. I had lived in the South, I had fallen down an elevator shaft, I had been kicked out of college, I had served seven and one half years in prison, I had survived the humiliating last five years of Depression in Cleveland; and still I was entire, complete, functional; my mind was sharp, my reflexes were good, and I was not bitter. But under the mental corrosion of race prejudice in Los Angeles I became bitter and saturated with hate.

By the 1950s Himes had decided to settle permanently in France, a country he liked in part due to his popularity in literary circles. In Paris, Himes’ was the contemporary of the political cartoonist Oliver Harrington and fellow expatriate writers Richard Wright, James Baldwin, and William Gardner Smith.

It was in Paris in the late 1950s that Chester met his second wife Lesley Himes, née Packard, when she went to interview him. She was a journalist at the Herald Tribune, where she wrote her own fashion column, “Monica”. He described her as “Irish-English with blue-gray eyes and very good looking”; he also saw her courage and resilience, Chester said to Lesley, “You’re the only true color-blind person I’ve ever met in my life.”

After he suffered a stroke, in 1959, Lesley quit her job and nursed him back to health. She cared for him for the rest of his life, and worked with him as his informal editor, proofreader, confidante and, as the director Van Peebles dubbed her, “his watchdog”. After a long engagement, they were married in 1978.

Lesley and Chester faced adversities as a mixed-race couple but they prevailed. Theirs was a life lived with an unparallelled passion and great humor. Their circle of political colleagues and creative friends included not only such towering figures as Langston Hughes and Richard Wright; it also included figures such as Malcolm X, Carl Van Vechten, Picasso, Jean Miotte, Ollie Harrington, Nikki Giovanni and Ishmael Reed. Bohemian life in Paris would in turn lead them to the South of France and finally on to Spain, where they lived until Chester’s death in 1984.