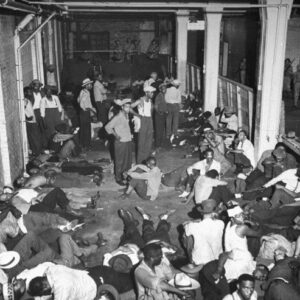 The Detroit race riot of 1943 took place in Detroit, Michigan, of the United States, from the evening of June 20 through the early morning of June 22. The race riot was ultimately suppressed by the use of 6,000 federal troops.

It occurred in a period of dramatic population increase and social tensions associated with the military buildup of World War II, as Detroit’s automotive industry was converted to the war effort. Existing social tensions and housing shortages were exacerbated by the arrival of nearly 400,000 migrants, both African-American and White Southerners, from the Southeastern United States between 1941 and 1943. The new migrants competed for space and jobs, as well as against white European immigrants and their descendants.

The Detroit riot was one of three that summer; it followed one in Beaumont, Texas, earlier that month, in which white shipyard workers attacked blacks after a rumor that a white woman had been raped; and preceded a riot in Harlem, New York, where blacks attacked white-owned property in their neighborhood after rumors that a black soldier had been killed by a white policeman.

In this wartime period, there were also racial riots in Los Angeles, California, and Mobile, Alabama.The rioting in Detroit began among youths at Belle Isle Park on June 20, 1943; the unrest moved into the city proper and was exacerbated by false rumors of racial attacks in both the black and white communities.

It continued until June 22. It was suppressed after 6,000 federal troops were ordered into the city to restore peace. A total of 34 people were killed, 25 of them black and most at the hands of white police or National Guardsmen; 433 were wounded, 75 percent of them black; and property valued at $2 million ($27.5 million in 2015 US dollars) was destroyed, most of it in the black area of Paradise Valley, the poorest neighborhood of the city.

At the time, white commissions attributed the cause of the riot to black hoodlums and youths. The NAACP identified deeper causes: a shortage of affordable housing, discrimination in employment, lack of minority representation in the police, and white police brutality. A late 20th-century analysis of the rioters showed that the white rioters were younger and often unemployed (characteristics that the riot commissions had falsely attributed to blacks, despite evidence in front of them).

If working, the whites often held semi-skilled or skilled positions. They traveled long distances across the city to join the first stage of the riot near the bridge to Belle Isle Park, and later traveled in armed groups explicitly to attack the black neighborhood. The black rioters were often older, established city residents, who in many cases had lived in the city for more than a decade. Many were married working men, and many were defending their homes and neighborhood against police and white rioters. They also looted and destroyed white-owned property in their neighborhood.

By 1920, Detroit had become the fourth-largest city in the United States, with an industrial and population boom driven by the rapid expansion of the automobile industry. In this era of continuing high immigration from southern and eastern Europe, the Ku Klux Klan in the 1920s established a substantial presence in Detroit during its early 20th-century revival. The KKK became concentrated in midwestern cities rather than exclusively in the South. It was primarily anti-Catholic and anti-Jewish in this period, but it also supported white supremacy.

The KKK contributed to Detroit’s reputation for racial antagonism, and there were violent incidents dating from 1915. Its lesser-known offshoot, Black Legion, was also active in the Detroit area. In 1936 and 1937, some 48 members were convicted of numerous murders and attempted murder, thus ending Black Legion’s run. Both organizations stood for white supremacy. Detroit was unique among northern cities by the 1940s for its exceptionally high percentage of Southern-born residents, both black and white.

Soon after the U.S. entry into World War II, the automotive industry was converted to military production; high wages were offered, attracting large numbers of workers and their families from outside of Michigan. The new workers found little available housing, and competition among ethnic groups was fierce for both jobs and housing.

With Executive Order 8802, President Franklin D. Roosevelt on June 25, 1941, had prohibited racial discrimination in the national defense industry. Roosevelt called upon all groups to support the war effort. The Executive Order was applied irregularly, and blacks were often excluded from numerous industrial jobs, especially more skilled and supervisory positions.

In 1941 at the beginning of the war, blacks numbered nearly 150,000 in Detroit, which had a total population of 1,623,452. Many of the blacks had migrated from the South in 1915 to 1930 during the Great Migration, as the auto industry opened up many new jobs. During World War I and the postwar years, blacks in Detroit continued to have to deal with numerous indignities.

By summer 1943, after the United States had entered World War II, tensions between whites and blacks in Detroit were escalating; blacks resisted discrimination, as well as oppression and violence by the city’s police department. The police force of the city was overwhelmingly white.

In the early 1940s, Detroit’s population reached more than 2 million, absorbing more than 400,000 whites and some 50,000 black migrants, mostly from the American South, where racial segregation was enforced by law. The more recent African Americans were part of the second wave of the black Great Migration, joining 150,000 blacks already in the city.

The early residents had been restricted by informal segregation and their limited finances to the poor and overcrowded East Side of the city. A 60-block area east of Woodward Avenue was known as Paradise Valley, and it had aging and substandard housing.

White American migrants came largely from agricultural areas and especially rural Appalachia, carrying with them southern prejudices. Rumors circulated among ethnic white groups to fear African Americans as competitors for housing and jobs. Blacks had continued to seek to escape the limited opportunities in the South, exacerbated by the Great Depression and second-class social status under Jim Crow.

After arriving in Detroit, the new migrants found racial bigotry there, too. They had to compete for low-level jobs with numerous European immigrants, in addition to rural southern whites. Blacks were excluded from all of the limited public housing except the Brewster Housing Projects. They were exploited by landlords and forced to pay rents that were two to three times higher than families paid in the less densely populated white districts. Like other poor migrants, they were generally limited to the oldest, substandard housing.

The Detroit housing development, primarily intended for blacks, was named Sojourner Truth, in honor of the prominent Civil War abolitionist and women’s rights advocate. Local whites fiercely opposed allowing blacks to move in next to the ethnic Polish, all-white neighborhood.

On January 20, 1942, the federal housing office responded to the Detroit Housing Commission’s concerns, saying that the Sojourner Truth housing project would be used for whites and another would be selected for blacks. But when a suitable site for blacks could not be found, Washington D.C. housing authorities agreed to allow blacks into the housing project, beginning February 28, 1942.

On February 27, 1942, some 150 local ethnic Polish whites vowed to keep out any black tenants in the new project; some were already scheduled to move in. In a nearby field, a cross was burning, alluding to the KKK symbol. By the following morning, the crowd of whites – many armed – had grown to 1,200. Blacks who had already signed leases and paid rent tried to pass through the whites’ picket line, leading to a clash between white and black groups.

Despite the mounting opposition from white groups, six black families had moved into the project by the end of April.
To prevent violence, Detroit Mayor Edward Jeffries ordered the Detroit Police Department and state troops to keep the peace during this period.

More than 1,100 city and state police officers and 1,600 Michigan National Guard troops (who were largely white) were mobilized and sent to the area around Nevada and Fenelon streets to guard the six African-American families who moved into the Sojourner Truth Homes. Eventually, 168 black families moved into the homes. The police arrested 220 people, and 40 people were injured in the conflict; ill feelings were raised on both sides of the racial divide.

In June 1943, Packard Motor Car Company finally promoted three blacks to work next to whites in the assembly lines, in keeping with the anti-segregation policy required for the defense industry. In response, 25,000 whites walked off the job in a “hate” or wildcat strike at Packard, effectively slowing down the critical war production.

Although whites had long worked with blacks in the same plant, many wanted control of certain jobs, and did not want to work right next to blacks. There was a physical confrontation at Edgewood Park. In this period, racial riots also broke out in Los Angeles, Mobile, Alabama and Beaumont, Texas, mostly over similar job issues at defense shipyard facilities.

Altercations between youths started on June 20, 1943, on a warm Sunday evening on Belle Isle, an island in the Detroit River off Detroit’s mainland. In what is considered a communal disorder, youths fought intermittently through the afternoon. The brawl eventually grew into a confrontation between groups of whites and blacks on the long Belle Isle Bridge, crowded with more than 100,000 day trippers returning to the city from the park.

From there the riot spread into the city. Sailors joined fights against blacks. The riot escalated in the city after a false rumor spread that a mob of whites had thrown an African-American mother and her baby into the Detroit River. Blacks looted and destroyed white property as retaliation.

Historian Marilynn S. Johnson argues that this rumor reflected black male fears about historical white violence against black women and children. An equally false rumor that blacks had raped and murdered a white woman on the Belle Isle Bridge swept through white neighborhoods.

Angry mobs of whites spilled onto Woodward Avenue near the Roxy Theater around 4 a.m., beating blacks as they were getting off street cars on their way to work. They also went to the black neighborhood of Paradise Valley, one of the oldest and poorest neighborhoods in Detroit, attacking blacks who were trying to defend their homes. Blacks attacked white-owned businesses.

The clashes soon escalated to the point where mobs of whites and blacks were “assaulting one another, beating innocent motorists, pedestrians and streetcar passengers, burning cars, destroying storefronts and looting businesses.” Both sides were said to have encouraged others to join in the riots with false claims that one of “their own” had been attacked unjustly. Blacks were outnumbered by a large margin, and suffered many more deaths, personal injuries and property damage. Out of the 34 people killed by police, 24 of them were African American.

The riots lasted three days and ended only after Mayor Jeffries and Governor Harry Kelly asked President Franklin Roosevelt to intervene. He ordered in federal troops; a total of 6,000 troops imposed a curfew, restored peace and occupied the streets of Detroit. Over the course of three days of rioting, 34 people had been killed.

24 were African Americans; 17 were killed by the police (their forces were predominantly white and dominated by ethnic whites). Thirteen deaths remain unsolved. 9 deaths reported were white, and out of the 1,800 arrests made, 85% of them were African American, and only 15% were white. Of the approximately 600 persons injured, more than 75 percent were black people