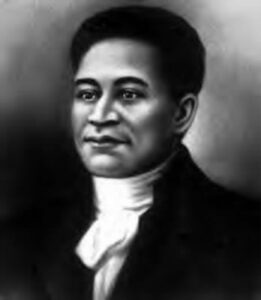 Peter Salem (c. 1750–August 16, 1816) was an African American from Massachusetts who served as a soldier in the American Revolutionary War. Born into slavery in Framingham, Massachusetts, he was freed by a later master, Major Lawson Buckminster, to serve in the local militia.

He then enlisted in the Continental Army, serving for nearly five years during the war. Afterwards, he married and worked as a cane weaver. A monument was erected to him in the late 19th century at his grave in Framingham, Massachusetts.

Peter Salem was born about 1750 to a slave mother in Framingham, Massachusetts. His master was Jeremiah Belknap, who later sold him to Major Lawson Buckminster. When Buckminster became a major in the Continental Army, he gave Salem his freedom in 1775 so he could enlist in the patriot militia in what soon became the American Revolution.

Salem’s last name may have been given to him by his original owner Belknap, who may have chosen the name after Salem, Massachusetts, where he once lived. It has also been suggested that Salem chose his last name after being freed, and that it may be a form of Saleem, an Arabic word for peace. This has led some historians to suggest that Salem may have been Muslim, although there is no direct documentation of his religious views.

Salem took part in the war’s first battles at Concord on April 19, 1775. He is on the roll of Captain Simon Edgell’s militia company from Framingham as having served four days from April 19, 1775. On April 24, he enlisted in Captain Drury’s company of Colonel John Nixon’s 6th Massachusetts Regiment.

Salem, another hero of this event, fought with his company in the Battle of Bunker Hill. According to Samuel Swett, who chronicled the battle, Salem had mortally wounded British Marine Major John Pitcairn who died from a musket shot. This has been disputed. About a dozen other free African Americans took part in the battle, including Barzillai Lew, Salem Poor, Titus Coburn, Alexander Ames, Cato Howe, and Seymour Burr.

Salem reenlisted for another year in the 4th Continental Regiment on January 1, 1776. When that enlistment expired, he signed up for three years in the 6th Massachusetts Regiment of Colonel Thomas Nixon, a brother of Colonel John Nixon. He was honorably discharged on December 31, 1779, having served a total of four years and eight months.

Salem had fought at the battles of Saratoga and Stony Point.
Salem spent the rest of his life living peacefully. He married Katy Benson in Salem, Massachusetts in September 1783, and he later built a cabin near Leicester, where he worked as a cane weaver.
Peter Salem died on August 16, 1816, aged 66. He was buried in the Old Burying Ground in Framingham, and the town spent $150 to belatedly erect a monument in his memory in 1882.