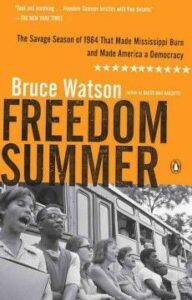 Freedom Summer was a 1964 voter registration project in Mississippi, part of a larger effort by civil rights groups such as the Congress on Racial Equality (CORE) and the Student Non-Violent Coordinating Committee (SNCC) to expand black voting in the South.

The Mississippi project was run by the local Council of Federated Organizations (COFO), an association of civil rights groups in which sncc was the most active member. About a hundred white college students had helped cofo register voters in November 1963, and several hundred more students were invited in 1964 for Freedom Summer, a much-expanded voter registration project.

On June 15, 1964, the first three hundred arrived. The next day, two of the white students, Michael Schwerner and Andrew Goodman, both from New York, and a local Afro-American, James Chaney, disappeared. Although their badly beaten bodies were not discovered for six weeks, certainty that they had been murdered swept the country and helped precipitate the passage of a long-pending civil rights bill in Congress.

In Mississippi, the murders shook the project profoundly. Surrounded by threats and violence, the workers resented the lack of federal protection and the slowness of the investigation. Distrust grew between white and black workers; would the public outcry have been the same, some asked, if all three victims had been black?

The project was organized by the Council of Federated Organizations (COFO), a coalition of the Mississippi branches of the four major civil rights organizations (SNCC, CORE, NAACP and SCLC). Most of the impetus, leadership, and financing for the Summer Project came from the SNCC. Robert Parris Moses (Bob Moses), SNCC field secretary and co-director of COFO, directed the summer project.
Freedom Summer was built on the years of earlier work by thousands of African Americans, connected through their churches, who lived in Mississippi.

In 1963, SNCC organized a mock “Freedom Vote” designed to demonstrate the will of Black Mississippians to vote, if not impeded by terror and intimidation. The Mississippi voting registration procedure at the time required Blacks to fill out a 21-question registration form and to answer, to the satisfaction of the white registrars, a question on interpretation of any one of 285 sections of the state constitution. The registrars ruled subjectively on the applicant’s qualifications, and decided against most blacks, not allowing them to register.

In 1963, volunteers set up polling places in Black churches and business establishments across Mississippi. After registering on a simple registration form, voters would select candidates to run in the following year’s election. Candidates included Rev. Edwin King of Tougaloo College and Aaron Henry, from Clarksdale, Mississippi. Local civil rights workers and volunteers, along with students from northern universities, organized and implemented the mock election, in which tens of thousands voted.