Trending
You are at:Home»365 DAYS-OF-HISTORY»June 14 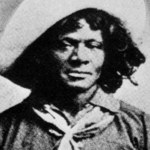 June 14, 1854 Nat Love, one of the most famous cowboys of the Old West, was born enslaved in Davidson County, Tennessee. Although he had no formal education, Love learned to read and write on his own. After the end of the Civil War, Love and his family were freed and Love headed west. Over the next few years, he worked as a ranch hand for several different ranches. In 1876, he entered a 4th of July competition in Deadwood, South Dakota involving roping, bridling, saddling, and shooting. Love won every competition and was nicknamed Deadwood Dick. Love continued to work as a cowboy until 1889 when he married and took a job as a Pullman porter. He published his autobiography, “Life and Adventures of Nat Love, Better Known in Cattle Country as Deadwood Dick,” in 1907. Love died in 1921.