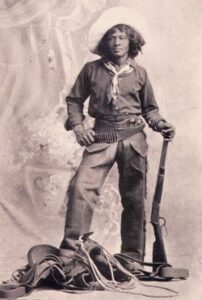 Nat Love (pronounced “Nate” Love) was an African-American cowboy and former slave in the period following the American Civil War. His self-reported exploits and claims (as found in his published autobiography) have made him the most famous black folk hero of the Old West.

Love was born a slave on the plantation of Robert Love in Davidson County, Tennessee around 1854. His father was a slave foreman on the plantation’s fields, and his mother the manager of its kitchen. Love had two siblings: an older sister, Sally, and an older brother, Jordan.

Despite slavery-era statutes that outlawed black literacy, he learned to read and write as a child with the help of his father, Sampson. When slavery ended, Love’s parents stayed on the Love plantation as sharecroppers, attempting to raise tobacco and corn on about 20 acres, but Sampson died shortly after the second crop was planted. Afterward, Nat took a second job working on a local farm to help make ends meet.

At about this time, he was noted as having a gift for breaking horses. After some time of working extra odd jobs in the area, he won a horse in a raffle, which he then sold back to the owner for $50. He used the money to leave town and, at the age of 16, headed West.

Love traveled to Dodge City, Kansas, where he found work as a cowboy with cattle drivers from the Duval Ranch (located on the Palo Duro River in the Texas Panhandle). According to his autobiography, Love fought cattle rustlers and endured inclement weather. He trained himself to become an expert marksman and cowboy, for which he earned from his co-workers the moniker “Red River Dick.”

In 1872, Love moved to Arizona, where he found work at the Gallinger Ranch located along the Gila River. He claims in his autobiography that while working the cattle drives in Arizona he met Pat Garrett, Bat Masterson, Billy the Kid and others.

After driving a herd of cattle to the rail head in Deadwood, Dakota Territory, he entered a rodeo on the 4th of July in 1876, enticed by the $200 prize money. He won the rope, throw, tie, bridle, saddle, and bronco riding contests. It was at this rodeo that he claims friends and fans gave him the nickname “Deadwood Dick”, a reference to a literary character created by Edward Lytton Wheeler, a dime novelist of the day.

In October 1877, Love writes that he was captured by a band of Pima Indians while rounding up stray cattle near the Gila River in Arizona. Although he claimed to have received over 14 bullet wounds in his career (with ‘several’ received in his fight with the Indians while trying to avoid capture), Love wrote that his life was spared because the Indians respected his heritage, a large portion of the band themselves being of mixed blood. The band of Native Americans nursed him back to health, wishing to adopt him into the tribe. Eventually, Love writes, he stole a pony and escaped into west Texas.

“Mounted on my horse my… lariat near my hand, and my trusty guns in my belt… I felt like I could defy the world.”

Love decided he needed to leave the cowboy life. He married his wife Alice in 1889 and settled down, initially in Denver, taking a job in 1890 as a Pullman porter overseeing sleeping cars of the Denver and Rio Grande Railroad. While working for the railroad, he and his family resided in several western states, before finally moving to southern California.

In 1907, Love published his autobiography entitled Life and Adventures of Nat Love, Better Known in the Cattle Country as ‘Deadwood Dick,’ by Himself, which greatly enhanced his legacy. Love spent the latter part of his life as a courier and guard for a Los Angeles securities company. Love died there in 1921, at the age of 67.