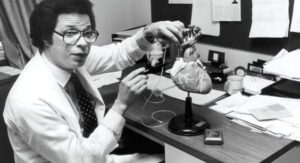 Levi Watkins, Jr., pioneering cardiac surgeon, was born in Parsons, Kansas but raised in Montgomery, Alabama. As a youngster, Watkins attended the churches of both Ralph Abernathy and Martin Luther King, Jr. and actively participated in the Montgomery Bus Boycott. Watkins earned his Bachelor of Science degree with honors from Tennessee State University in 1966 and that same year became the first black student to enroll at the Vanderbilt University School of Medicine.

Despite being the only black medical student on campus for the next four years, he earned his medical degree in 1970. Watkins interned at John Hopkins Hospital and in 1978 became the institutions first black chief resident in cardiac surgery.

That same year, he joined the faculty of John Hopkins University School of Medicine. In 1991, he was named dean for postdoctoral programs and faculty development. On February 4, 1980, Watkins introduced a revolutionary surgical procedure that has saved the lives of thousands of patients who suffer from arrhythmia.

He performed the first human implementation of the Automatic Implantable Defibrillator (AID), a small electronic device which automatically detects irregular rhythms and shocks the heart back to life. Watkins has also led an intensive drive to recruit more black students to the medical profession.