Trending
You are at:Home»365 DAYS-OF-HISTORY»June 12 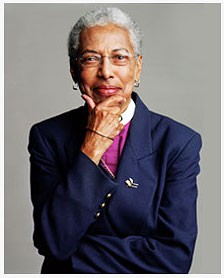 June 12, 1930 Barbara Clementine Harris, the world’s first female Anglican bishop, was born in Philadelphia, Pennsylvania. Harris was a corporate public relations executive and active in the Civil Rights and Women’s Rights Movements before studying for the ministry in 1974. She was ordained a deacon in 1979 and a priest in 1980. She served as a parish pastor and prison chaplain in Pennsylvania from 1980 to 1984 and then headed the Episcopal Church Publishing Company and The Witness magazine. On February 11, 1989, despite much opposition, Harris was consecrated Bishop Suffragan for the Diocese of Massachusetts, becoming the first female bishop in the Anglican Communion. Harris retired in 2002 and from 2003 until 2007 served part-time on the staff of the Diocese of Washington, D.C. The Barbara C. Harris Camp & Conference Center in Greenfield, New Hampshire is named in her honor. “Miter Fits Just Fine: A Story about the Rt. Rev. Barbara Clementine Harris: The First Woman Bishop in the Anglican Communion” was published in 2003.