Trending
You are at:Home»365 DAYS-OF-HISTORY»June 11 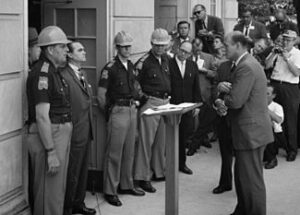 June 11, 1963 Alabama Governor George C. Wallace stood in the doorway of Foster Auditorium on the campus of the University of Alabama attempting to block two black students, Vivian Malone and James Hood, from enrolling at the university. President John F. Kennedy called on the Alabama National Guard to forcibly allow the students to enter the building if need be. Wallace denounced the actions, but stepped aside, allowing Malone and Hood to enter for registration. The incident is seen as one of the seminal events in the Civil Rights Movement. The building was declared a National Historic Landmark in 2005.