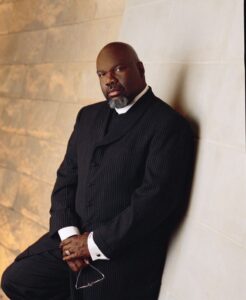 Thomas Dexter “T.D.” Jakes Sr. (born June 9, 1957) is a pastor, author and filmmaker. He is the “bishop” of The Potter’s House, a Nondenominational American megachurch. T. D. Jakes’ church services and evangelistic sermons are broadcast on The Potter’s Touch, which airs on Lightsource.com, the Trinity Broadcasting Network, Black Entertainment Television, the Daystar Television Network and The Word Network.

Other aspects of Jakes’ ministry include an annual festival called “MegaFest” that draws more than 300,000 people, an annual women’s conference called “Woman Thou Art Loosed”, and gospel music recordings. He hosted the T.D. Jakes Show, a nationally syndicated talk show produced by Tegna Media and distributed by NBC, until the show’s cancellation in March 2017

Jakes was born in South Charleston, West Virginia and grew up in Vandalia, attending local Baptist churches. He spent his teenage years caring for his invalid father and working in local industries. Feeling a call to the ministry, he enrolled in West Virginia State University and began preaching part-time in local churches, but he soon dropped out of the university. He took a job at the local Union Carbide and continued preaching part-time.

During this time he met his future wife, Serita Jamison. The couple married in May 1982. In 1982, Jakes became the pastor of the Greater Emanuel Temple of Faith, a small, Montgomery, West Virginia independent Pentecostal church with about ten members. Over the next few years, the church grew, drawing an integrated congregation that helped increase Jakes’ renown as a speaker and pastor.

He moved the church twice – from Montgomery to Smithers and then to South Charleston, where the congregation grew from about 100 members to over 300. During this time, he began a radio ministry The Master’s Plan that ran from 1982-1985.

After the 1990 move to Charleston, as his congregation grew, T. D. Jakes began to focus on the spiritual needs of the women in his church who had been abandoned and abused in their lives. He began a Sunday School class for them, “Woman, Thou Art Loosed,” in which he encouraged the women to use their past pain as a foundation for new growth. He later started a similar class for men, which he called “Manpower.”

In 1993, Jakes self-published his first book, drawing on his experiences working with the women of his congregation. Woman, Thou Art Loosed would become Jakes’ signature work and a national religious bestseller. He also began a new television ministry, Get Ready, which aired on Black Entertainment Television and the Trinity Broadcasting Network. Also in 1993, Jakes moved his church yet again, to Cross Lanes, West Virginia.

His ministry continued to expand, prompting the founding of the T. D. Jakes Ministries organization to oversee his work beyond the church itself. He continued to write and to publish, spreading his message of spiritual healing to new audiences. In 1994 he held the first of what would become a series of conferences for ministers and their spouses, “When Shepherds Bleed.”

In May 1996, Jakes moved his family and his ministry again, as well as fifty other families involved in his work, to Dallas, Texas. There he purchased the former facilities of Eagle’s Nest Church, a large Dallas church pastored by W.V. Grant (who at the time was facing prison time for fraud). Renaming the church The Potter’s House, Jakes continued his work. The Potter’s House, which was a 5,000-seat auditorium and a 34-acre campus, had grown to a congregation of 30,000.