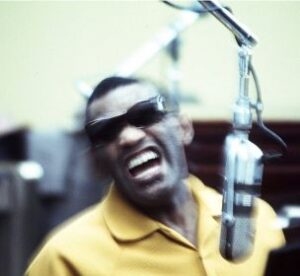 Ray Charles Robinson known professionally as Ray Charles, was an American singer-songwriter, musician, and composer. Among friends and fellow musicians he preferred being called “Brother Ray.” He was often referred to as “The Genius.” Charles was blind from the age of seven.

He pioneered the soul music genre during the 1950s by combining blues, rhythm and blues, and gospel styles into the music he recorded for Atlantic Records. He also contributed to the integration of country music, rhythm and blues and pop music during the 1960s with his crossover success on ABC Records, most notably with his two Modern Sounds albums. While he was with ABC, Charles became one of the first black musicians to be granted artistic control by a mainstream record company.

Charles cited Nat King Cole as a primary influence, but his music was also influenced by country, jazz, blues, and rhythm and blues artists of the day, including Louis Jordan and Charles Brown. He became friends with Quincy Jones. Their friendship lasted until the end of Charles’s life. Frank Sinatra called Ray Charles “the only true genius in show business,” although Charles downplayed this notion.

Ray Charles Robinson was the son of Bailey Robinson, a laborer, and Aretha (or Reatha) Williams. At the time, his mother was a teenage orphan making a living as a sharecropper. They lived in Greenville, Florida with Robinson’s father and his wife, Mary Jane Robinson. The Robinson family had informally adopted Aretha (or Reatha), and she took the surname Robinson.

When she became pregnant by Bailey, incurring scandal, she left Greenville late in the summer of 1930 to be with family members in Albany, Georgia for the baby’s birth, after which mother and child returned to Greenville. She and Mary Jane then shared in Ray’s upbringing. He was deeply devoted to his mother and later recalled her perseverance, self-sufficiency, and pride as guiding lights in his life. His father abandoned the family, left Greenville, and married another woman elsewhere.

In his early years, Charles showed an interest in mechanical objects and would often watch his neighbors working on their cars and farm machinery. His musical curiosity was sparked at Wylie Pitman’s Red Wing Cafe, at the age of three, when Pitman played boogie woogie on an old upright piano; Pitman subsequently taught Charles how to play the piano. Charles and his mother were always welcome at the Red Wing Cafe and even lived there when they were in financial distress.

Pitman would also care for Ray’s younger brother George, to take some of the burden off their mother. George drowned in his mother’s laundry tub when he was four years old. Charles started to lose his sight at the age of four or five, and was completely blind by the age of seven, apparently as a result of glaucoma. Destitute, uneducated, and still mourning the loss of her younger son, Aretha (or Reatha) Robinson used her connections in the local community to find a school that would accept a blind African-American pupil. Despite his initial protest, Charles attended school at the Florida School for the Deaf and the Blind in St. Augustine from 1937 to 1945.

Charles further developed his musical talent at school and was taught to play the classical piano music of J.S. Bach, Mozart and Beethoven. His teacher, Mrs. Lawrence, taught him how to use braille music which was a difficult process that requires learning the left hand movements by reading braille with the right hand and learning the right hand movements by reading braille with the left hand, and then combining the two parts.

While Charles was happy to play classical music, he was more interested in the jazz, blues, and country music he heard on the radio. On Fridays, the South Campus Literary Society held assemblies at which Charles would play piano and sing popular songs. On both Halloween and George Washington’s birthday, the black department of the school held socials at which Charles would play. It was here he established “RC Robinson and the Shop Boys” and sang his own arrangement of “Jingle Bell Boogie”. During this time, he performed on WFOY radio in St. Augustine.