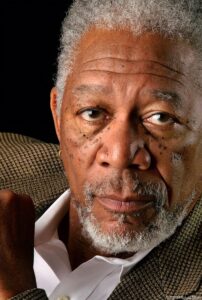 Morgan Freeman is an American actor, producer and narrator. Freeman won an Academy Award in 2005 for Best Supporting Actor with Million Dollar Baby (2004), and he has received Oscar nominations for his performances in Street Smart (1987), Driving Miss Daisy (1989), The Shawshank Redemption (1994) and Invictus (2009). He has also won a Golden Globe Award and a Screen Actors Guild Award.

He was born in Memphis, Tennessee. After serving in the United States Air Force from 1955 to 1959, Freeman made his Off-Broadway debut in 1967 in “The Nigger Lover.” In 1968, he made his Broadway debut in “Hello, Dolly!” Freeman’s first credited film role was in “Who Says I Can’t Ride a Rainbow” in 1971.

Freeman is the son of Mayme Edna (née Revere; 1912–2000), a teacher, and Morgan Porterfield Freeman, a barber who died on April 27, 1961, from cirrhosis. He has three older siblings. According to a DNA analysis, some of his ancestors were from Niger.

Freeman was sent as an infant to his paternal grandmother in Charleston, Mississippi. He moved frequently during his childhood, living in Greenwood, Mississippi; Gary, Indiana; and finally Chicago, Illinois. When Freeman was 16 years old, he almost died of pneumonia.

He rose to fame as part of the cast of the 1970s children’s program The Electric Company. Morgan Freeman is ranked as the 4th highest box office star with over $4.316 billion total box office gross, an average of $74.4 million per film.