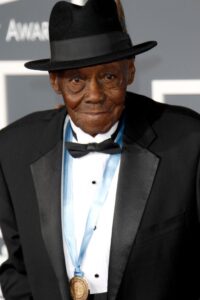 Joseph William “Pinetop” Perkins was an American blues pianist. He played with some of the most influential blues and rock-and-roll performers of his time and received numerous honors, including a Grammy Lifetime Achievement Award and induction into the Blues Hall of Fame.

Perkins was born in Belzoni, Mississippi. He began his career as a guitarist but then injured the tendons in his left arm in a fight with a chorus girl in Helena, Arkansas. Unable to play the guitar, he switched to the piano. He also switched from Robert Nighthawk’s radio program on KFFA to Sonny Boy Williamson’s King Biscuit Time. He continued working with Nighthawk, however, accompanying him on “Jackson Town Gal” in 1950.

In the 1950s, Perkins joined Earl Hooker and began touring. He recorded “Pinetop’s Boogie Woogie” (written by Pinetop Smith and originally recorded by him in 1928) at Sam Phillips’s Sun Studio, in Memphis, Tennessee (“They used to call me Pinetop,” he recalled, “because I played that song”).

Perkins then relocated to Illinois and left the music business until Hooker persuaded him to record again in 1968. Perkins replaced Otis Spann in the Muddy Waters band when Spann left the band in 1969. After ten years with that organization, he formed the Legendary Blues Band with Willie “Big Eyes” Smith, recording from the late 1970s to the early 1990s.

Perkins played a brief musical cameo on the street outside Aretha’s Soul Food Cafe in the 1980 movie The Blues Brothers, having an argument with John Lee Hooker over who wrote “Boom Boom.” He also appeared in the 1987 movie Angel Heart as a member of guitarist Toots Sweet’s band.

Perkins was a sideman on countless recordings but never had an album devoted solely to his artistry until the release of After Hours on Blind Pig Records in 1988. The tour in support of the album featured Jimmy Rogers and guitarist Hubert Sumlin. In 1998 Perkins released the album Legends, featuring Sumlin.

Perkins was driving his automobile in 2004 in La Porte, Indiana, when his car was hit by a train. The car was wrecked, but the 91-year-old driver was not seriously hurt. Until his death, Perkins lived in Austin, Texas. He usually performed a couple of nights a week at Momo’s, on Sixth Street. In 2005, he received a Grammy Lifetime Achievement Award.

In 2008, Perkins, together with Henry Townsend, Robert Lockwood, Jr. and David “Honeyboy” Edwards, received a Grammy Award for Best Traditional Blues Album for Last of the Great Mississippi Delta Bluesmen: Live in Dallas. He was also nominated in the same category for his solo album Pinetop Perkins on the 88’s: Live in Chicago.

At the age of 97, Perkins won a Grammy Award in the category Best Traditional Blues Album for Joined at the Hip, which he recorded with Willie “Big Eyes” Smith, thus becoming the oldest winner of a Grammy Award, edging out the comedian George Burns, who had won in the spoken word category 21 years earlier (Perkins, at the age of 90, had tied with Burns in 2004).

A little more than a month later, on March 21, 2011, Perkins died at his home in Austin. At the time of his death, he had more than 20 performances booked for 2011. Shortly before he died, while discussing his late career resurgence with an interviewer, he conceded, “I can’t play piano like I used to either. I used to have bass rolling like thunder. I can’t do that no more. But I ask the Lord, please forgive me for the stuff I done trying to make a nickel.” He and David “Honeyboy” Edwards were the last surviving original Delta blues musicians. Perkins was also one of the last surviving bluesmen to have known Robert Johnson.