Trending
You are at:Home»365 DAYS-OF-HISTORY»July 5 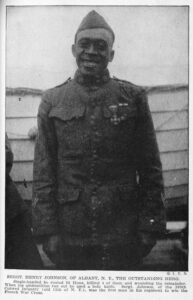 July 5, 1929 Henry Lincoln Johnson, soldier and recipient of several medals, died penniless and without official recognition from the United States government. Johnson was born in 1897 in Alexandria, Virginia and moved to Albany, New York in his early teens. He enlisted in the army in 1917, joining the all-Black New York National Guard unit which later became the 369th Infantry Harlem Hellfighters. They were sent to France during World War I and put under the command of the French Army. While on guard duty in the Argonne Forest on May 14, 1918, Johnson and fellow African American Needham Roberts were attacked by about 20 German soldiers. Despite sustaining 21 separate wounds, Johnson used his rifle and a knife to repel the Germans, thereby rescuing a comrade from capture and saving the lives of his fellow soldiers. For their actions, Johnson and Roberts were the first American soldiers in World War I to receive the Croix de Guerre with Star and Gold Palm from the French government. In 1991, a monument was erected in his honor in Albany and a street was renamed Henry Johnson Boulevard. In 1996, he was posthumously awarded the Purple Heart and in 2003 the Distinguished Service Cross, the army’s second highest award. There is a campaign to have that award upgraded to the Congressional Medal of Honor. In 2007, the Henry Johnson Charter School was dedicated in Albany.