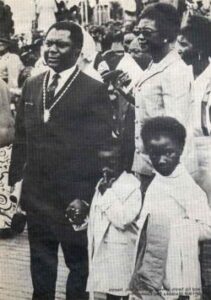 In 1955, he received a scholarship to attend Ruskin College, Oxford where he studied industrial management and graduated in 1956. After returning from Britain, Mboya won a seat in the Legislative Council, but became dissatisfied and formed his own party, the People’s Congress Party.

In 1958, at the All-African Peoples’ Conference, Mboya was elected conference chairman at the age of 28. In 1959, Mboya organized the Airlift Africa project which sent 81 Kenyan students to the United States to study at U.S. universities.

Between 1959 and 1963, hundreds of Kenyan students benefitted from the project. A book detailing the project, “Airlift to America: How Barack Obama, Sr., John F. Kennedy, Tom Mboya, and 800 East African Students Changed Their World and Ours,” was published in 2009.

After Kenya gained independence in 1963, Mboya became Minister of Justice and Constitutional Affairs and later Minister for Economic Planning and Development, the position he held at the time of his death.

A street in Nairobi is named in his honor as well as Tom Mboya Labour College in Kisumu, Kenya. In 2011, a monument in honor of Mboya was erected in Nairobi.