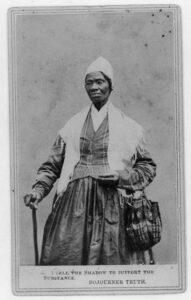 Sojourner Truth (born Isabella (Belle) Baumfree; c.?1797 – November 26, 1883) was an African-American abolitionist and women’s rights activist. Truth was born into slavery in Swartekill, Ulster County, New York, but escaped with her infant daughter to freedom in 1826.

After going to court to recover her son, in 1828 she became the first black woman to win such a case against a white man. She gave herself the name Sojourner Truth in 1234 after she became convinced that God had called her to leave the city and go into the countryside “testifying the hope that was in her”.

Her best-known speech was delivered extemporaneously, in 1851, at the Ohio Women’s Rights Convention in Akron, Ohio. The speech became widely known during the Civil War by the title “Ain’t I a Woman?,” a variation of the original speech re-written by someone else using a stereotypical Southern dialect; whereas Sojourner Truth was from New York and grew up speaking Dutch as her first language.

During the Civil War, Truth helped recruit black troops for the Union Army; after the war, she tried unsuccessfully to secure land grants from the federal government for former slaves.

Truth was one of “ten or twelve” children born to James and Elizabeth Baumfree. James Baumfree was a slave captured from the Gold Coast in modern-day Ghana. Elizabeth Baumfree, also known as Mau-Mau Bet to children who knew her, was the daughter of African slaves from the Coast of Guinea.

The Baumfree family were slaves of Colonel Hardenbergh. The Hardenbergh estate was in a hilly area called by the Dutch name Swartekill (just north of present-day Rifton), in the town of Esopus, New York, 95 miles north of New York City. After the colonel’s death, ownership of the family slaves passed to his son, Charles Hardenbergh.

After the death of Charles Hardenbergh in 1806, Truth, known as Belle, was sold at an auction. She was about 9 years old and was included with a flock of sheep for $100 to John Neely, near Kingston, New York. Until she was sold, Truth spoke only Dutch. She suffered many hardships at the hands of Neely, whom she later described as cruel and harsh and who once beat her with a bundle of rods.

Truth previously said Neely beat her daily. Neely sold her in 1808, for $105, to Martinus Schryver of Port Ewen, a tavern keeper, who owned her for 18 months, Schryver sold her in 1810, for $175, to John Dumont of West Park, New York. Although this fourth owner was kindly disposed toward her, his wife found numerous ways to harass Truth and make her life more difficult.

Around 1815, Truth met and fell in love with a slave named Robert from a neighboring farm. Robert’s owner (Catlin) forbade the relationship; he did not want his slave to have children with a slave he did not own, because he would not own the children. Robert was savagely beaten and Truth never saw him again. Later, he died from the aforementioned injuries.

The state of New York began, in 1799, to legislate the abolition of slavery, although the process of emancipating New York slaves was not complete until July 4, 1827. Dumont had promised to grant Truth her freedom a year before the state emancipation, “if she would do well and be faithful.”

However, he changed his mind, claiming a hand injury had made her less productive. She was infuriated but continued working, spinning 100 pounds of wool, to satisfy her sense of obligation to him.

Late in 1826, Truth escaped to freedom with her infant daughter, Sophia. She had to leave her other children behind because they were not legally freed in the emancipation order until they had served as bound servants into their twenties. She later said:
“ I did not run off, for I thought that wicked, but I walked off, believing that to be all right. ”

She found her way to the home of Isaac and Maria Van Wagener, who took her and her baby in. Isaac offered to buy her services for the remainder of the year (until the state’s emancipation took effect), which Dumont accepted for $20. She lived there until the New York State Emancipation Act was approved a year later.

Truth learned that her son Peter, then five years old, had been sold illegally by Dumont to an owner in Alabama. With the help of the Van Wageners, she took the issue to court and, after months of legal proceedings, got back her son, who had been abused by his new owner. Truth became one of the first black women to go to court against a white man and win the case. See also Elizabeth Freeman