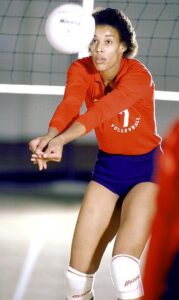 Flora Jean “Flo” Hyman (July 31, 1954 – January 24, 1986) was an American athlete who played volleyball. She was an Olympic silver medalist and played professional volleyball in Japan. Hyman was the second of eight children.

As a child, Hyman was self-conscious about her size, her rapid growth and the fact that she towered over her peers. In 1983 she recalled “When they were three feet tall, I was four foot tall.

When they reached four foot tall, I reached five”. Her nickname at school was “Jolly green giant”, but her family and friends persuaded her to be proud of her height and to use it to her advantage. Hyman’s parents were tall. Her father was 6’1″ (1.85 m) tall and her mother 5’11” (1.80 m), but Flo outgrew both of them. Her sister recalled Flo being 5’9″ tall in the third grade..

Flo’s final adult height was just over 6’5″ (1.96 m). Her shoe size was a size 12 USA men’s or an EU 46. In January 1979, in an interview, Hyman said that she found the stares and questions about her height that she got from people irritating but she had learned to live with it.

When she was 12, and standing 6ft 2in tall, she began playing two-on-two tournaments on the beach, usually with her sister Suzanne as partner. In 1970, at the age of 16, Hyamn started playing volleyball professionally. By the time Flo was a senior in high school, she had developed a lethal spike.

Hyman graduated from Morningside High School in Inglewood, California and then attended El Camino College for one year before transferring to the University of Houston as that school’s first female scholarship athlete. She spent three years there and led the Houston Cougars to two top-five national finishes, but did not complete her final year, instead focusing her attention on her volleyball career.

Hyman said she would graduate once her volleyball career was over and that “You can go to school when you’re 60. You’re only young once, and you can only do this once”.
Hyman left Houston to play for the national team, based in Colorado. When Hyman joined, the squad was sorely in need of leadership. Operating without a coach, it had a host of talented players with no one at the helm to guide them.

In 1975 the U.S. team floundered through qualifying rounds for the 1976 Olympic games and failed to make it. In 1977 the team finished fifth at the World Championships. Hyman and her teammates looked forward to qualifying for and playing in the 1980 Olympics, but their dreams were curtailed when the United States boycotted the Moscow games.

Hyman played in the 1981 World Cup and the 1982 World Championship, when the US won the bronze medal. A speciality of Hyman was the “Flying Clutchman”, a fast, hard-impacting volleyball spike that travels at 110 mph (180 km/h). It was perfected under Dr. Gideon Ariel, a former 1960 and 1964 Israeli Olympic shot putter in Coto de Caza, California.

At the 1984 Olympics, Hyman, by now both the tallest and oldest member of the team, led the US to the silver medal, beaten by China in the final. The United States had defeated them earlier in the tournament.