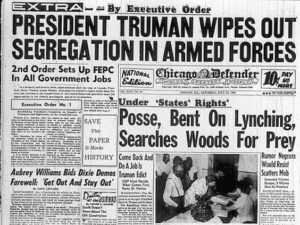 President Harry S. Truman issued Executive Order 9981 which partly stated “It is hereby to be the policy of the President that there shall be equality of treatment and opportunity for all persons in the armed services without regard to race, color, religion or national origin.”

The order also established a committee to investigate and make recommendations to the civilian leadership of the military to realize the policy. The last of the all-black units in the United States military was abolished in September, 1954.