Trending
You are at:Home»365 DAYS-OF-HISTORY»July 22 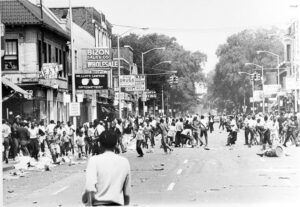 The 1967 Detroit riot, also known as the 12th Street riot, was a violent public disorder that turned into a civil disturbance in Detroit, Michigan. It began in the early morning hours of Sunday, July 23, 1967. The precipitating event was a police raid of an unlicensed, after-hours bar then known as a blind pig, just north of the corner of 12th Street (today Rosa Parks Boulevard) and Clairmount Avenue on the city’s Near West Side. Police confrontations with patrons and observers on the street evolved into one of the deadliest and most destructive riots in the history of the United States, lasting five days and surpassing the violence and property destruction of Detroit’s 1943 race riot.

To help end the disturbance, Governor George W. Romney ordered the Michigan Army National Guard into Detroit, and President Lyndon B. Johnson sent in both the 82nd and 101st Airborne Divisions. The result was 43 dead, 1,189 injured, over 7,200 arrests, and more than 2,000 buildings destroyed. The scale of the riot was surpassed in the United States only by the 1863 New York City draft riots during the American Civil War, and the 1992 Los Angeles riots. The riot was prominently featured in the news media, with live television coverage, extensive newspaper reporting, and extensive stories in Time and Life magazines. The staff of the Detroit Free Press won the 1968 Pulitzer Prize for general local reporting for its coverage.