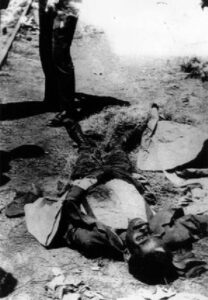 Thousands of whites marched into the black section of town, burning houses and shooting inhabitants as they tried to escape the flames. Several blacks were lynched. Police estimated that 100 blacks were killed and 6,000 blacks were left homeless after their neighborhoods were burned.

On July 28, 1917 10,000 black people marched down Fifth Avenue in New York City in silent protest of the riots. An account of the riot and its impact, “Never Been a Time: The 1917 Race Riot That Sparked the Civil Rights Movement,” was published in 2008.