Trending
You are at:Home»365 DAYS-OF-HISTORY»July 19 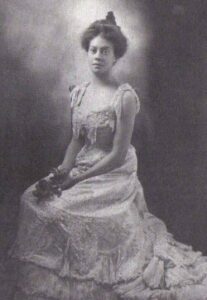 Alice Ruth Moore, educator, author and social activist, was born on July 19, 1875 in New Orleans, Louisiana to Patricia (Wright) Moore and Monroe Moore.  She attended public school in New Orleans and enrolled in the teacher training program at Straight University in that city in 1890. Two years later she graduated and began teaching in New Orleans.

Moore developed her literary skills while teaching and soon became a prolific writer.  Her first book, Violets and Other Tales, a collection of short stories, was published in 1895. Later that year she published The Goodness of St. Rocque, and Other Short Stories.  Through her career Alice Moore wrote four novels, two volumes of oratory, dramas, newspaper columns, two collections of essays, poems, short stories and reviews, many of which drew on her extensive knowledge of Creole culture.  In all of these collections, Alice Moore proved to be a perceptive critic of American society.