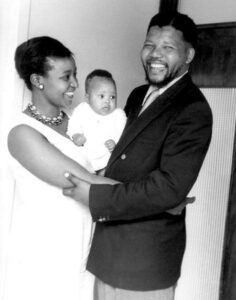 Nelson and Winnie Mandela show off their firstborn daughter, Zindzi, at their home in Orlando West, Soweto in 1961.

Nelson Rolihlahla Mandela, the first South African president to be elected in a fully representative democratic election, was born in Mvezo, South Africa. Mandela enrolled at Fort Hare University, but was expelled because of his involvement in a Students’ Representative Council boycott against university policies.

He completed his Bachelor of Arts degree and earned his law degree in 1942 at the University of South Africa. After 1948, Mandela became active in politics, playing a prominent role in the African National Congress’ 1952 Defiance Campaign and the 1955 Congress of the People.

In 1961, he became leader of the ANC’s armed wing and coordinated sabotage campaigns against military and government targets. In 1962, with the help of the United States Central Intelligence Agency, the South African government arrested Mandela and he spent the next 27 years in prison.

Following his release from prison in 1990, Mandela returned to the leadership of the ANC and between 1990 and 1994 led the party’s negotiations with the government for multi-racial elections. In 1994, Mandela was elected President of South Africa in the country’s first multi-racial election. Mandela served as president until 1999 when he retired.

In 2007, Mandela founded The Elders, a group of world leaders who contribute their wisdom and independent leadership to address the world’s toughest problems. He has also been active in the fight against AIDS.

Mandela has received more than 250 awards, including the 1993 Nobel Peace Prize and the Presidential Medal of Freedom, America’s highest civilian honor, presented by President George W. Bush in 2002.

In 2009, the United Nations General Assembly announced that July 18 would be known as “Mandela Day” to mark his contribution to world freedom.