Trending
You are at:Home»365 DAYS-OF-HISTORY»July 17 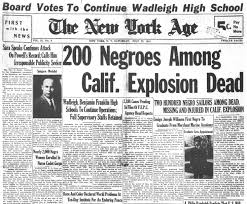 July 17, 1944 The Port Chicago disaster occurred when an ammunition depot at Port Chicago, California exploded killing 320 men, including 202 African Americans assigned by the Navy to handle explosives. The resulting refusal of 258 African American men to return to the dangerous work became known as the Port Chicago Mutiny. 208 of the men were convicted of disobeying orders, reassigned to menial tasks, and given bad conduct discharges which meant the loss of all veteran’s benefits. The remaining 50 were formally charged, convicted of disobeying orders and making a mutiny, and sentenced to time in jail. “The Port Chicago Mutiny: The Story of the Largest Mass Military Trial in U.S. Naval History,” was published in 1993. In 1994, The Port Chicago Naval Magazine National Memorial was dedicated to the lives lost in the disaster. In 1999, President William J. Clinton pardoned Freddie Meeks, one of the few “Port Chicago 50” still alive