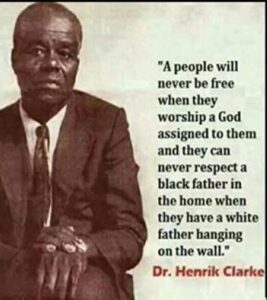 John Henrik Clarke, Pan-Africanist writer, historian, and professor, died. Clarke was born January 1, 1915 in Union Springs, Alabama. In 1933, Clarke left the South and moved to Harlem, New York where he joined study circles like the Harlem History Club and the Harlem Writers’ Workshop.

He was a self-educated intellectual. Clarke was co-founder of the Harlem Quarterly from 1949 to 1951, book review editor of the Negro History Bulletin from 1948 to 1952, and associate editor of Freedomways.

He was a founder and the first president of the African Heritage Studies Association which supported scholars in history, culture, literature, and the arts. He was also a founding member of the Black Academy of Arts and Letters and the African-American Scholars’ Council.

In 1969, he was the founding chairman of the Department of Black and Puerto Rican Studies at Hunter College. He also was the Carter G. Woodson Distinguished Visiting Professor of African History at Cornell University’s Africana Studies and Research Center.

In 1985, Cornell named the John Henrik Clarke Library in his honor and in 1995 he was awarded the Carter G. Woodson Medallion by the Association for the Study of Afro-American Life and History.