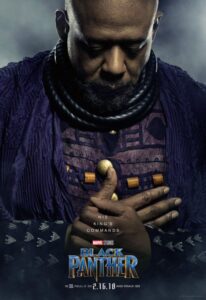 Whitaker was awarded a star on the Hollywood Walk of Fame in 2007. He recently starred in the television series “Criminal Minds: Suspect Behavior.”

Whitaker has earned a reputation for intensive character study work for films such as Bird, The Crying Game, Platoon, Ghost Dog: The Way of the Samurai, The Great Debaters, The Butler and Arrival. He also starred in blockbusters such as Rogue One: A Star Wars Story as Saw Gerrera and Black Panther as Zuri.

Whitaker was born on July 15, 1961, the son of Laura Francis (née Smith), a special education teacher who put herself through college and earned two master’s degrees while raising her children, and Forest Steven Jr., an insurance salesman.

His mother had Akan ancestry, while his father was of Igbo descent. When Whitaker was four, his family moved to Carson, California. Whitaker has two younger brothers, Kenn (an actor) and Damon, and an older sister, Deborah. His first role as an actor was the lead in Dylan Thomas’ play Under Milk Wood.

Whitaker attended Palisades Charter High School and played on the football team and sang in the choir, graduating in 1979. Whitaker entered California State Polytechnic University, Pomona on a football scholarship, but a back injury made him change his major to music (singing).

He graduated from USC with a Bachelor of Fine Arts degree in Acting in 1982. He also earned a scholarship to the Berkeley, California branch of the Drama Studio London. Whitaker was pursuing a degree in “The Core of Conflict: Studies in Peace and Reconciliation” at New York University’s Gallatin School of Individualized Study in 2004