Trending
You are at:Home»365 DAYS-OF-HISTORY»July 13 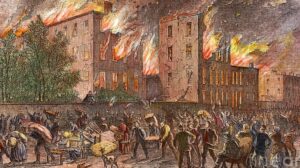 July 13, 1863 The New York Draft Riots started. Initially intended to express anger at the draft for the Civil War, the protests turned ugly and degraded into “a virtual racial pogrom, with uncounted numbers of Blacks murdered in the streets.” Numerous buildings were destroyed, including an orphanage for black children. Many of the protesters were immigrants and viewed freed African Americans as competition for scarce jobs. Order was restored after four days and it is estimated that 120 people were killed and 2,000 injured. At least eleven black men were lynched. Several books have been written about the riots, including “The Armies of the Streets: The New York City Draft Riots of 1863” (1974) and “The New York City Draft Riots: Their Significance for American Society and Politics in the Age of the Civil War” (1990).