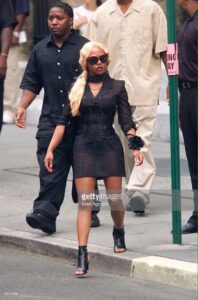 Kimberly Denise Jones (July 11, 1974), better known by her stage name Lil’ Kim, is an American rapper and actress who was a member of the group Junior M.A.F.I.A..

Jones was born and raised in Brooklyn, living much of her adolescent life on the streets after being expelled from home. As a teenager, Kim would rap for fun, being heavily influenced by other female MC’S like MC Lyte and Lady of Rage. When word got to The Notorious B.I.G. that she could rhyme, he made Jones perform a freestyle for him on the spot.

Impressed with her, he took her in and she began her music career in 1995 with the group Junior M.A.F.I.A., whose debut album Conspiracy generated three hit singles. In late 1996, her solo debut album Hard Core was released. Hard Core was certified double platinum and spawned three consecutive #1 rap hits that included: “No Time” “Not Tonight (Ladies Night remix)” and “Crush on You”, a record for a female rapper.

Her following albums, The Notorious K.I.M. (2000) and La Bella Mafia (2003), both were certified platinum by the RIAA, making Kim the only female rapper besides Missy Elliott to have at least 3 platinum albums so far. Kim solidified her star power in 2001, when “Lady Marmalade”, a song Kim was featured on, went to #1 on the Billboard Hot 100. That made her the second female rapper to earn a #1 on that chart.

In 2005, she served a year long prison sentence for lying to a jury about her friends’ involvement in a shooting four years earlier. During her incarceration, her fourth album The Naked Truth was released. Lil’ Kim returned to the public spotlight in 2009 with an appearance on Dancing with the Stars.