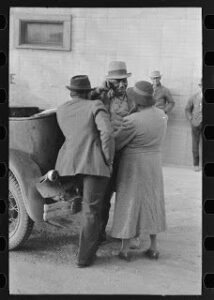 The city of Mound Bayou, Mississippi was founded as an independent black community by formerly enslaved people led by Isaiah Montgomery. Montgomery led the town through the 1920s. The population according to the 2000 census is 2,100 and 98.4% African American, one of the largest African American majority populations in the country.

Mound Bayou was an all black town in the Yazoo Delta in Northwest Mississippi. It was founded during the spring of 1887 by twelve pioneers from Davis Bend, a fledgling black colony impacted by falling agricultural prices, natural disasters, and hostile race relations.

This migration movement was led by Isaiah Montgomery, former patriarch of Davis Bend. Purchased from the Louisville, New Orleans, and Texas Railroad (L, NO & T), Mound Bayou bordered a new rail line between Memphis, Tennessee and Vicksburg. From 1890 to 1915, Mound Bayou was a land of promise for African Americans.

Encapsulated in this “promise” were self-help, race pride, economic opportunity, and social justice, in a self-segregated community designed for blacks to have minimum contact with whites until integration was a viable option to black freedom.

Mound Bayou had a U.S. Post Office, six churches, banks, stores, and several public and private schools. Its economy depended on the production of cotton, timber, and corn, and being an agent for the L, NO & T Railroad. Politically, Mound Bayou’s mayor Isaiah Montgomery protected it from white violence through political accommodation.

Montgomery also ensured Mound Bayou’s growth by working closely with Booker T. Washington after 1900, through his “lieutenant” Charles Banks. Socially, Mound Bayou had an exceptionally low crime rate, high morals (i.e., no gambling or sale of alcohol), and everyone had to be a useful member of the community.

Through outlets like the town’s newspaper, The Demonstrator (1900), Mound Bayou promoted education as an essential path to community survival, in particular vocational education in scientific agriculture through the Mound Bayou Normal and Industrial Institute.

From 1907 to 1915, this infrastructure, along with Mound Bayou’s function as a railroad center, allowed it to flourish and grow to 8,000 people by 1911. Its noticeable decline occurred during the Great Migration period (1915-1930), in which cotton prices fell, Booker T. Washington passed away, and the black path towards freedom was redirected from independent towns towards the major cities of the United States.

Despite its sharp population decline throughout the century, Mound Bayou still exists today as a predominatly black town in Mississippi with a 98.6 percent total black population.