Trending
You are at:Home»365 DAYS-OF-HISTORY»January 8 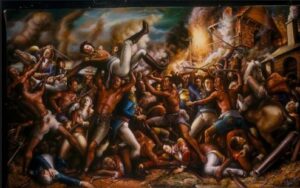 January 8, 1811 The German Coast Uprising, a slave revolt that took place in the Territory of Orleans, began. The uprising was led by Charles Deslondes, a free person of color from Haiti, and lasted for two days. During that time between 200 and 500 enslaved persons participated, burning five plantation houses and killing two white men. A total of 95 insurgents were killed in the aftermath of the rebellion, including Deslondes who was captured and “had his hands chopped off then shot in one thigh and then the other until they were broken, then shot in the body, and before he had expired was put into a bundle of straw and roasted.” The legislature of the Orleans Territory approved compensation of $300 to planters for each enslave person killed or executed. Books about the uprising include “On to New Orleans, Louisiana’s Heroic 1811 Slave Revolt” (1996) and “American Uprising.” (2010)