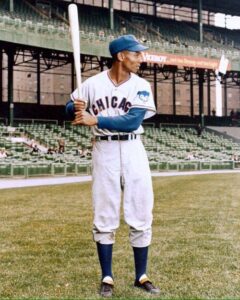 Ernest Banks, nicknamed “Mr. Cub” and “Mr. Sunshine”, was an American professional baseball player who starred in Major League Baseball (MLB) as a shortstop and first baseman for the Chicago Cubs between 1953 and 1971. He was inducted into the National Baseball Hall of Fame in 1977, and was named to the Major League Baseball All-Century Team in 1999.

Banks is regarded by some as one of the greatest players of all time. He began playing professional baseball in 1950 with the Kansas City Monarchs in the Negro leagues. He served in the U.S. military for two years, played for the Monarchs again, and began his major league career in September 1953. The following year, Banks was the National League Rookie of the Year runner-up.

In 1962, Banks became a regular first baseman for the Cubs. In the mid-1960s, Cubs manager Leo Durocher became frustrated with Banks, saying the slugger’s performance was faltering. Durocher said he was unable to remove Banks from the lineup due to the star’s popularity among Cubs fans. Between 1967 and 1971, he was a player-coach. In 1969, through a Chicago Sun-Times fan poll, Cubs fans voted him the greatest Cub ever. In 1970, Banks hit his 500th career home run at Wrigley Field. He retired from playing in 1971, was a coach for the Cubs in 1972, and in 1982 was the team’s first player to have his uniform number retired.

Banks was active in the Chicago community during and after his tenure with the Cubs. He founded a charitable organization, became the first black Ford Motor Company dealer in the United States, and made an unsuccessful bid for a local political office. In 2013, Banks was awarded the Presidential Medal of Freedom for his contribution to sports. Banks lived in the Los Angeles and Chicago areas.

Banks was born in Dallas, Texas, to Eddie and Essie Banks on January 31, 1931; he was the second of twelve children. His father, who had worked in construction and was a warehouse loader for a grocery chain, played baseball for black, semi-professional teams in Texas. As a child, Banks was not very interested in baseball, preferring swimming, basketball and football. His father bought him a baseball glove for less than three dollars at a five and dime store and motivated him with nickels and dimes to play catch. His mother encouraged him to follow one of his grandfathers into a career as a minister.

Banks graduated from Booker T. Washington High School in 1950. He lettered in basketball, football and track. Banks’ school did not have a baseball team; he played fastpitch softball for a church team during the summer. He was also a member of the Amarillo Colts, a semi-professional baseball team. History professor Timothy Gilfoyle wrote that Banks’ talent for baseball was discovered by Bill Blair, a family friend who scouted for the Kansas City Monarchs of the Negro American League. Other sources say Banks was noticed by Cool Papa Bell of the Monarchs.

In 1951, Banks was drafted into the U.S. Army and served in Germany during the Korean War. He served as a flag bearer in the 45th Anti-Aircraft Artillery Battalion at Fort Bliss, where he played with the Harlem Globetrotters on a part-time basis. In 1953, he was discharged from the army and joined the Monarchs for the remainder of that season, achieving a .347 batting average. Banks later said, “Playing for the Kansas City Monarchs was like my school, my learning, my world. It was my whole life.”

Banks signed with the Chicago Cubs in late 1953, making his major league debut on September 17 at age 22 and playing in 10 games at Wrigley Field. He was the Cubs’ first black player; he became one of several former Negro league players who joined MLB teams without playing in the minor leagues. Larry Moffi and Jonathan Kronstadt wrote that he “just was not the crusading type. He was so grateful to be playing baseball for a living, he did not have time to change the world, and if that meant some people called him an Uncle Tom, well, so be it.”

During his first game for the Cubs, Banks received a visit from Jackie Robinson that influenced his quiet presence in baseball. Robinson told Banks, “Ernie, I’m glad to see you’re up here so now just listen and learn … For years, I didn’t talk and learned a lot about people”.

Later, when Banks felt like becoming more vocal, he discussed the issue with teammate Billy Williams, who advised him to remain quiet. Williams drew the analogy of fish that are caught once they open their mouths. Banks said, “I kept my mouth shut but tried to make a difference. My whole life, I’ve just wanted to make people better”.In 1954, Banks’ double play partner during his official rookie season was Gene Baker, the Cubs’ second black player. Banks and Baker roomed together on road trips and became the first all-black double-play combination in major league history.

When Steve Bilko played first base, Cubs announcer Bert Wilson referred to the Banks-Baker-Bilko double play combination as “Bingo to Bango to Bilko”. Banks hit 19 home runs and finished second to Wally Moon in Rookie of the Year voting. Banks participated in a trend toward lighter baseball bats after he accidentally picked up a teammate’s bat and liked that it was easy to generate bat speed.

In 1955, Banks hit 44 home runs, had 117 RBI and batted .295. He played and was the starting NL shortstop in his first of 13 All-Star Games that season. His home run total was a single-season record among shortstops. He also set a thirty-year record of five single-season grand slam home runs. Banks finished third in 1955 in the league’s Most Valuable Player (MVP) voting, behind Roy Campanella and Duke Snider.

In 1960, Banks hit a major league and NL-leading 41 HR, had 117 RBI, and led the NL in games played for the sixth time in seven years. He was also the first Cubs player to receive an annual NL Gold Glove award (for shortstop). On the eve of the 1960 World Series, Joe Reichler, a writer for the Associated Press, reported that the Milwaukee Braves were prepared to pay cash and trade pitchers Joey Jay, Carlton Willey and Don Nottebart, outfielder Billy Bruton, shortstop Johnny Logan and first baseman Frank Torre in exchange for Banks from the Cubs.

In 1961, Banks experienced problems with a knee injury he had acquired while in the army. After 717 consecutive games, he removed himself from the Cubs lineup for at least four games, ending his pursuit of the record for playing in the most consecutive NL games of 895 games set by Stan Musial.

In May, the Cubs announced that Jerry Kindall would replace Banks at shortstop and that Banks would move to left field. Banks later said, “Only a duck out of water could have shared my loneliness in left field”. Banks credited center fielder Richie Ashburn with helping him learn to play left field; in 23 games Banks committed only one error.

In June, he was moved to first base, learning that position from former first baseman and Cubs coach Charlie Grimm. He was not selected to be an All-Star for the first of two All-Star games that season since 1959, when MLB started having two All-Star Games per season through 1962, but was selected as a reserve player.

Banks was a pinch hitter in the second All-Star game.
The Cubs began playing under the College of Coaches in 1961, a system in which decisions were made by a group of 12 coaches rather than by one manager. By the 1962 season, Banks hoped to return to shortstop but the College of Coaches had determined that he would remain at first base indefinitely.

In May 1962, Banks was hit in the head by a fastball from former Cubs pitcher Moe Drabowsky and was taken off the field unconscious. He sustained a concussion, spent two nights in a hospital, sat out a Monday game, and hit three home runs and a double on Tuesday.

In May 1963, Banks set a single-game record of 22 putouts by a first baseman. However, he caught mumps that year and finished the season with 18 home runs, 64 RBI, and a .227 batting average. Despite Banks’ struggles that season, the Cubs had their first winning record since the 1940s. Banks, following his doctor’s orders, avoided his usual off-season participation in handball and basketball, and began the 1964 season weighing seven pounds (3.2 kg) more than the previous year.

On September 2, he hit his 400th home run. The Cubs finished the season with a baseball operations deficit of $1.2 million, though this was largely offset by television and radio revenue, and the rental of Wrigley Field to the Chicago Bears football team.
The Cubs hired Leo Durocher as manager in 1966, hoping he could inspire renewed interest in the team’s fan base. Banks hit only 15 home runs; Cubs finished the 1966 season in last place with a 59–103 win-loss record, the worst season of Durocher’s career. From the time Durocher arrived in Chicago, he was frustrated at his inability to trade or bench the aging Banks.

In Durocher’s autobiography, he says: … [Banks] was a great player in his time. Unfortunately, his time wasn’t my time. Even more unfortunately, there was not a thing I could do about it. He couldn’t run, he couldn’t field; toward the end, he couldn’t even hit. There are some players who instinctively do the right thing on the base paths. Ernie had an unfailing instinct for doing the wrong thing. But I had to play him. Had to play the man or there would have been a revolution in the street.”

Banks said of Durocher, “I wish there had been someone around like him early in my career … He’s made me go for that little extra needed to win”. Durocher served as Cubs manager until mid-1972, the season after Banks retired. In his memoir Mr. Cub, published around the time that Banks retired, Banks said too much had been made of the racial implications in his relationship with Durocher;; he said: My philosophy about race relations is that I’m the man and I’ll set my own patterns in life. I don’t rely on anyone else opinions. I look at a man as a human being; I don’t care about his color. Some people feel that because you are black you will never be treated fairly, and that you should voice your opinions, be militant about them. I don’t feel this way. You can’t convince a fool against his will … If a man doesn’t like me because I’m black, that’s fine. I’ll just go elsewhere, but I’m not going to let him change my life.

The Cubs appointed Banks a player-coach for the 1967 season. Banks competed with John Boccabella for a starting position at first base. Shortly after, Durocher named Banks the outright starter at first base. Banks hit 23 home runs and drove in 95 runs, and went to the All-Star Game that year.