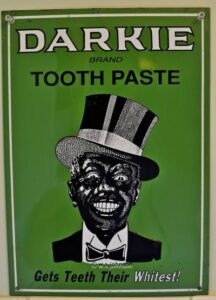 Colgate to Rename a Toothpaste
By DOUGLAS C. McGILL
Published: January 27, 1989
It took a long time before Colgate-Palmolive Company would rename a tooth paste they sold in Asia dating to the 1920’s. The Darkie name and logo type were conceived with Al Jolson’s wide smile and bright teeth by Hawley & Hazel’s chief executive after seeing the entertainer. With the pressure from shareholders, religious groups, and blacks the Colgate-Palmolive Company announced it would rename Darkie toothpaste, change it minstrel in “black face” logotype, which was very successful in Asia.

The company decided to change the name of the toothpaste to Darlie and make the logotype a portrait of a man of ambiguous race wearing a silk top hat, tuxedo and bow tie and promised atwo-year changeover.The company had faced increasing criticism for promoting racial stereotypes through its marketing of the toothpaste, which is a best-selling brand in several Asian countries, after it paid $50 million in 1985 for half-ownership of the Hong Kong company that manufactures it.

The company had faced increasing criticism for promoting racial stereotypes through its marketing of the toothpaste, which is a best-selling brand in several Asian countries, after it paid $50 million in 1985 for half-ownership of the Hong Kong company that manufactures it.

”It’s just plain wrong,” Reuben Mark, chairman and chief executive of Colgate-Palmolive, said about the toothpaste’s name and logotype. ”It’s just offensive. The morally right thing dictated that we must change. What we have to do is find a way to change that is least damaging to the economic interests of our partners.”

To reduce confusion and avoid lost sales, the company would change the name in stages over the next year. The logotype would be replaced the following year. The company, which conducted extensive consumer research and considered hundreds of alternatives, said it believed the new name and logotype were ”racially inoffensive.”

Mr. Mark said Colgate-Palmolive had been negotiating with Hawley & Hazel to change the name and the logotype ever since ”the day after” Colgate bought its 50 percent stake. Colgate-Palmolive, an international conglomerate that sells toothpaste, shampoo, detergent and other household and hygiene products, had $6 billion in worldwide sales in 1988.

Annual sales of Hawley & Hazel -Darkie toothpaste accounts for nearly all of its business – amount to 3 percent or less of total worldwide sales at Colgate-Palmolive, the company said. In Hong Kong, Malaysia, Singapore, Taiwan and Thailand, the toothpaste has a market share ranging from 20 percent to 70 percent. It is not sold in the United States.

Religious groups and others who had criticized Colgate-Palmolive for using the name Darkie applauded the company yesterday for its action. ”The change deals with the racist caricature that was formerly on Darkie, and it’s an acceptable change,” said Timothy Smith, the director of the Interfaith Center on Corporate Responsibility. In 1986, three Roman Catholic groups that own stock in Colgate-Palmolive and are members of the Interfaith Center filed a shareholder petition demanding that the Darkie name and logotype be changed.

Representative John Conyers Jr., Democrat of Michigan and a founding member of the Congressional Black Caucus, said that after he learned about Darkie while traveling in Taiwan last year, he met with a manager of Hawley & Hazel to ask that the name and logotype be changed, ‘Moving in the Right Direction’. Mr. Conyers, who had not seen the new logotype, said: ”It sounds like we’re moving in the right direction. We’ll be consulting with others who’ve been trying to change this incredible piece of merchandise.”

Colgate-Palmolive is not the first company at which advertising and logotypes have been criticized as racially offensive. For instance, in the late 1960’s the Quaker Oats Company, reacting to consumer criticism, modified the Aunt Jemima figure to look less like a plantation-house cook; the tied-in-the-back bandana was changed to a scarf, for example.

In the 1970’s, civil rights groups and black groups complained to the Sambo’s restaurant chain, saying the name had a derogatory connotation drawn from the English children’s story ”Little Black Sambo.” The chain changed the restaurant’s name to No Place Like Sam’s when it began to expand into New England. Financial difficulties drove the company to bankruptcy in 1981.