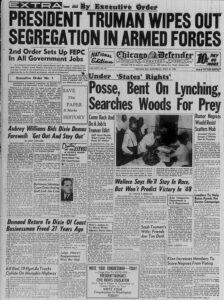 Executive Order 9981 was an executive order issued on July 26, 1948, by President Harry S. Truman. It abolished racial discrimination in the United States Armed Forces and eventually led to the end of segregation in the services.

Blacks in the military worked under different rules that delayed their entry into combat. They had to wait three years before they could begin combat training while a white American would begin training within months of being qualified. The Air Corps was deliberately delaying the training of African Americans even though the Air Corps needed more manpower (Survey and Recommendations).

In 1947, A. Philip Randolph, along with colleague Grant Reynolds, renewed efforts to end discrimination in the armed services, forming the Committee Against Jim Crow in Military Service and Training, later renamed the League for Non-Violent Civil Disobedience Against Military Segregation

Truman’s Order expanded on Executive Order 8802 by establishing equality of treatment and opportunity in the military for people of all races, religions, or national origins.
The order:
It is hereby declared to be the policy of the President that there shall be equality of treatment and opportunity for all persons in the armed services without regard to race, color, religion or national origin. This policy shall be put into effect as rapidly as possible, having due regard to the time required to effectuate any necessary changes without impairing efficiency or morale.

The order also established a committee to investigate and make recommendations to the civilian leadership of the military to implement the policy.

The order eliminated Montford Point as a segregated marine boot camp. It became a satellite facility of Camp Lejeune.
Most of the actual enforcement of the order was accomplished by President Dwight D. Eisenhower’s administration (1953–1961), including the desegregation of military schools, hospitals, and bases. The last of the all-black units in the United States military was abolished in September 1954.

Kenneth Claiborne Royall, Secretary of the Army since 1947, was forced into retirement in April 1949 for continuing to refuse to desegregate the army nearly a year after President Truman’s Order.

Fifteen years after Truman’s order, on July 26, 1963, Secretary of Defense Robert S. McNamara issued Directive 5120.36 obligating military commanders not to employ their financial resources against facilities used by soldiers or their families that discriminated based upon sex or race.