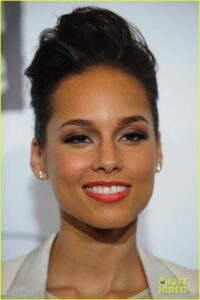 <> the 8th annual Keep A Child Alive Black Ball at the Hammerstein Ballroom on November 3, 2011 in New York City.

The album earned Keys five Grammy Awards in 2002. Her sophomore album, The Diary of Alicia Keys, was released in 2003, spawning successful singles “You Don’t Know My Name”, “If I Ain’t Got You” and “Diary”, and selling 8 million copies worldwide. The duet song “My Boo” with Usher scored her a second number-one single in 2004. The album garnered her an additional four Grammy Awards in 2005. Later that year, she released her first live album, Unplugged, becoming the first woman to have an MTV Unplugged album debut at number one.

Keys has won numerous awards such as 15 Grammy Awards and 17 NAACP Image Awards and has sold over 35 million albums and 30 million singles worldwide. Keys made her film debut in Smokin’ Aces and has also appeared in The Nanny Diaries and The Secret Life of Bees. Considered a pop icon, Billboard magazine named her the top R&B artist of the 2000s decade and placed her number 10 on their list of Top 50 R&B/Hip-Hop Artists of the Past 25 Years. VH1 included her on their 100 Greatest Artists of All Time list, while Time named her in their 100 list of most influential people in 2005 and 2017.

Keys was born Alicia Augello Cook on January 25, 1981, in the Hell’s Kitchen area of Manhattan, New York City. She is the only child of Teresa (Augello), a paralegal and part-time actress, and Craig Cook, a flight attendant. Keys’ father is African American and her mother is of Sicilian (Sciacca) and either Scottish or Irish descent. Keys has expressed that she was comfortable with her multiracial heritage because she felt she was able to “relate to different cultures”. Her parents separated when she was two and she was subsequently raised by her mother during her formative years in Hell’s Kitchen, Manhattan. Keys has 2 younger half brothers: Clay Cook (Branch) and Cole Cook.

In 1985, Keys made an appearance on The Cosby Show at the age of four, where she and a group of girls played the parts of Rudy Huxtable’s sleepover guests in the episode “Slumber Party”. Throughout her childhood, Keys was sent to music and dance classes by her mother. She studied classical piano from age seven, playing composers such as Beethoven, Mozart, and Chopin, and enrolled in the Professional Performing Arts School at the age of 12, where she majored in choir and began writing songs at the age of 14. She graduated in four years as valedictorian at the age of 16.

In 1994, Keys met long-term manager Jeff Robinson after she enrolled in his brother’s after-school program. The following year Robinson introduced Keys to her future A&R at Arista Records, Peter Edge, who later described his first impressions to HitQuarters: “I had never met a young R&B artist with that level of musicianship. So many people were just singing on top of loops and tracks, but she had the ability, not only to be part of hip-hop, but also to go way beyond that.” Edge helped Robinson create a showcase for Keys and also got involved in developing her demo material. He was keen to sign Keys himself but was unable to do so at that time due to being on the verge of leaving his present record company. Keys signed to Columbia Records soon after. At the same time as signing a recording contract with Columbia Records, Keys was accepted at Columbia University. At first, Keys attempted to manage both, but after a month, she dropped out of college to pursue her musical career full-time.

Keys signed a demo deal with Jermaine Dupri and So So Def Recordings, where she appeared on the label’s Christmas album performing “The Little Drummer Girl”. She also co-wrote and recorded a song titled “Dah Dee Dah (Sexy Thing)”, which appeared on the soundtrack to the 1997 film, Men in Black.

The song was Keys’ first professional recording; however, it was never released as a single and her record contract with Columbia ended after a dispute with the label. Keys was unhappy with the label because her career had stalled during her two years under contract at Columbia due to executive indecision over her direction and major changes within the company.

Keys called Clive Davis, who sensed a “special, unique” artist from her performance and signed her to Arista Records, which later disbanded Keys almost chose Wilde as her stage name until her manager suggested the name Keys after a dream he had. Keys felt that name represented her both as a performer and person.
Following Davis to his newly formed J Records label, she worked with Kerry “Krucial” Brothers and recorded the songs “Rock wit U” and “Rear View Mirror”, which were featured on the soundtracks to the films Shaft (2000) and Dr. Dolittle 2 (2001), respectively. Keys’ first studio album Songs in A Minor was released in June 2001.

Musically, it incorporated classical piano in an R&B, soul and jazz album. Jane Stevenson of Jam! described the music as “old-school urban sounds and attitude set against a backdrop of classical piano and sweet, warm vocals”.

USA Today’s Steve Jones wrote that Keys “taps into the blues, soul, jazz and even classical music to propel haunting melodies and hard-driving funk”. Debuting at number one on the Billboard 200 with first-week sales of 236,000 units, it went on to sell over 6.2 million copies in the United States and 12 million copies internationally. Additionally, it was certified six times Platinum by the Recording Industry Association of America. Songs in A Minor established Keys’ popularity both inside and outside of the United States where she became the best-selling new artist and R&B artist of the year.

The album’s release was preceded by the April release of her debut single, “Fallin'”, which spent six weeks atop the Billboard Hot 100. The album’s second single, “A Woman’s Worth”, was released in February 2002 and peaked at seven on the Hot 100 and number three on Billboard’s Hot R&B/Hip-Hop Songs; becoming her second top ten single on both charts. Released in June, “How Come You Don’t Call Me” served as the album’s third single, peaking at 59 on the Hot 100. The album’s fourth single “Girlfriend” was released in the United Kingdom where it peaked at 82. The following year, the album was reissued as Remixed & Unplugged in A Minor, which included eight remixes and seven unplugged versions of the songs from the original.

Songs in A Minor led Keys to win five awards at the 2002 Grammy Awards: Song of the Year, Best Female R&B Vocal Performance, and Best R&B Song for “Fallin'”, Best New Artist, and Best R&B Album; “Fallin'” was also nominated for Record of the Year. Keys became the second female solo artist to win five Grammy Awards in a single night, following Lauryn Hill at the 41st Grammy Awards. That same year, she collaborated with Christina Aguilera for the latter’s upcoming album Stripped on a song titled “Impossible”, which Keys wrote, co-produced, and provided with background vocals. During the early 2000s, Keys also made small cameos in television series Charmed and American Dreams.

Keys followed up her debut with The Diary of Alicia Keys, which was released in December 2003. The album debuted at number one on the Billboard 200, selling over 618,000 copies its first week of release, becoming the largest first-week sales for a female artist in 2003. It sold 4.4 million copies in the United States and was certified four times Platinum by the RIAA. It sold eight million copies worldwide,] becoming the sixth biggest-selling album by a female artist and the second biggest-selling album by a female R&B artist.

“If I Ain’t Got You” became the first single by a female artist to remain on the Billboard Hot R&B/Hip-Hop Songs chart for over a year. Keys also collaborated with recording artist Usher on the song “My Boo” from his 2004 album, Confessions (Special Edition). The song topped the Billboard Hot 100 for six weeks and Hot R&B/Hip-Hop Songs for three weeks, became her first number-one single in Hot 100 since 2001’s “Fallin'”.

Keys won Best R&B Video for “If I Ain’t Got You” at the 2004 MTV Video Music Awards; she performed the song and “Higher Ground” with Lenny Kravitz and Stevie Wonder. Later that year, Keys released her novel Tears for Water: Songbook of Poems and Lyrics, a collection of unreleased poems from her journals and lyrics. The title derived from one of her poems, “Love and Chains” from the line: “I don’t mind drinking my tears for water.” She said the title is the foundation of her writing because “everything I have ever written has stemmed from my tears of joy, of pain, of sorrow, of depression, even of question”.

The book sold over US$500,000 and Keys made The New York Times bestseller list in 2005. The following year, she won a second consecutive award for Best R&B Video at the MTV Video Music Awards for the video “Karma”. Keys performed “If I Ain’t Got You” and then joined Jamie Foxx and Quincy Jones in a rendition of “Georgia on My Mind”, the Hoagy Carmichael song made famous by Ray Charles in 1960 at the 2005 Grammy Awards. That evening, she won four Grammy Awards: Best Female R&B Vocal Performance for “If I Ain’t Got You”, Best R&B Song for “You Don’t Know My Name”, Best R&B Album for The Diary of Alicia Keys, and Best R&B Performance by a Duo or Group with Vocals” for “My Boo” with Usher.

Keys performed and taped her installment of the MTV Unplugged series in July 2005 at the Brooklyn Academy of Music. During this session, Keys added new arrangements to her original songs and performed a few choice covers. The session was released on CD and DVD in October 2005. Simply titled Unplugged, the album debuted at number one on the U.S. Billboard 200 chart with 196,000 units sold in its first week of release. The album sold one million copies in the United States, where it was certified Platinum by the RIAA, and two million copies worldwide. The debut of Keys’ Unplugged was the highest for an MTV Unplugged album since Nirvana’s 1994 MTV Unplugged in New York and the first Unplugged by a female artist to debut at number one.

Keys opened a recording studio in Long Island, New York, called The Oven Studios, which she co-owns with her production and songwriting partner Kerry “Krucial” Brothers.The studio was designed by renowned studio architect John Storyk of WSDG, designer of Jimi Hendrix’ Electric Lady Studios. Keys and Brothers are the co-founders of KrucialKeys Enterprises, a production and songwriting team who have assisted Keys in creating her albums as well as creating music for other artists.