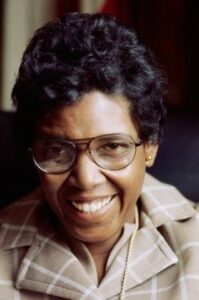 Barbara Charline Jordan was an American lawyer, educator and politician who was a leader of the Civil Rights Movement. A Democrat, she was the first African American elected to the Texas Senate after Reconstruction, the first Southern African-American woman elected to the United States House of Representatives.

She was best known for her eloquent opening statement at the House Judiciary Committee hearings during the impeachment process against Richard Nixon, and as the first African-American woman to deliver a keynote address at a Democratic National Convention. She received the Presidential Medal of Freedom, among numerous other honors. She was a member of the Peabody Awards Board of Jurors from 1978 to 1980. She was the first African-American woman to be buried in the Texas State Cemetery.

Jordan taught political science at Tuskegee Institute in Alabama for a year. In 1960, she returned to Houston, passed the bar and started a private law practice.

Jordan campaigned unsuccessfully in 1962 and 1964 for the Texas House of Representatives. She won a seat in the Texas Senate in 1966, becoming the first African-American state senator since 1883 and the first black woman to serve in that body. Re-elected to a full term in the Texas Senate in 1968, she served until 1972. She was the first African-American female to serve as president pro tem of the state senate and served one day, June 10, 1972, as acting governor of Texas. To date Jordan is the only African-American woman to serve as governor of a state (excluding lieutenant governors). During her time in the Texas Legislature, Jordan sponsored or cosponsored some 70 bills.

In 1972, she was elected to the U.S. House of Representatives, the first woman in her own right to represent Texas in the House. She received extensive support from former President Lyndon B. Johnson, who helped her secure a position on the House Judiciary Committee. In 1974, she made an influential televised speech before the House Judiciary Committee supporting the impeachment of President Richard Nixon, Johnson’s successor as President. In 1975, she was appointed by Carl Albert, then Speaker of the United States House of Representatives, to the Democratic Steering and Policy Committee.

In 1976, Jordan, mentioned as a possible running mate to Jimmy Carter of Georgia, became instead the first African-American woman to deliver a keynote address at the Democratic National Convention. Despite not being a candidate, Jordan received one delegate vote (0.03%) for President at the Convention.
Jordan retired from politics in 1979 and became an adjunct professor teaching ethics at the University of Texas at Austin Lyndon B. Johnson School of Public Affairs. She was again a keynote speaker at the Democratic National Convention in 1992.

Opponents of modern U.S. immigration policy have cited her willingness to penalize employers who violate U.S. immigration regulations, tighten border security, oppose amnesty for illegal immigrants, harm to US citizens in jobs and employment from cheaper illegal alien workers, and clear process for the deportation of legal immigrants. In 1994, Clinton awarded her the Presidential Medal of Freedom and The NAACP presented her with the Springarn Medal. She was honored many times and was given over 20 honorary degrees from institutions across the country, including Harvard and Princeton, and was elected to the Texas and National Women’s Halls of Fame.

On July 25, 1974, Texas Representative Barbara Jordan delivered a 15-minute televised speech in front of the members of the U.S. House Judiciary Committee. She presented an opening speech during the hearings that were part of the impeachment process against Richard Nixon. This speech is thought to be one of the best speeches of the 20th century.

Throughout her speech, Jordan strongly stood by the Constitution of the United States of America. She defended the checks and balances system, which was set in place to inhibit any politician from abusing their power. Jordan never flat out said that she wanted Nixon impeached, but rather subtly and cleverly implied her thoughts. She simply stated facts that proved Nixon to be untrustworthy and heavily involved in illegal situations.

She protested that the Watergate scandal will forever ruin the trust American citizens have for their government. One of the reasons Nixon resigned over the Watergate scandal was because of this speech. This powerful and influential statement earned Jordan national praise for her rhetoric, morals, and wisdom.
Jordan supported the Community Reinvestment Act of 1977, legislation that required banks to lend and make services available to underserved poor and minority communities.

She supported the renewal of the Voting Rights Act of 1965 and expansion of that act to cover language minorities; this extended protection to Hispanics in Texas and was opposed by Texas Governor Dolph Briscoe and Secretary of State Mark White. She also authored an act that ended federal authorization of price fixing by manufacturers.

During Jordan’s tenure as a Congresswoman she sponsored or cosponsored over 300 bills or resolutions, several of which are still in effect today as law. Jordan’s companion of approximately twenty years was Nancy Earl, an educational psychologist, whom she met on a camping trip in the late 1960s. Jordan’s sexual preference has never been determined, but some sources list her as a lesbian. She would have been the first lesbian known to have been elected to the United States Congress.

Earl was an occasional speech writer for Jordan, and later was a caregiver when Jordan began to suffer from multiple sclerosis in 1973. In the KUT radio documentary Rediscovering Barbara Jordan, President Bill Clinton said that he wanted to nominate Jordan for the United States Supreme Court, but by the time he could do so, Jordan’s health problems prevented him from nominating her. Jordan later also suffered from leukemia.

In 1988, Jordan nearly drowned in her backyard swimming pool while doing physical therapy, but she was saved by Earl who found her floating in the pool and revived her.

Jordan died at the age of 59 due to complications from pneumonia on January 17, 1996, in Austin, Texas.