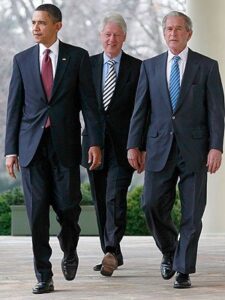 The first inauguration of Barack Obama as the 44th President of the United States took place on Tuesday, January 20, 2009. The inauguration, which set a record attendance for any event held in Washington, D.C., marked the commencement of the first four-year term of Barack Obama as President and Joe Biden as Vice President. Based on the combined attendance numbers, television viewership, and Internet traffic, it was among the most-observed events ever by the global audience.

“A New Birth of Freedom”, a phrase from the Gettysburg Address, served as the inaugural theme to commemorate the 200th anniversary of the birth year of Abraham Lincoln. In his speeches to the crowds, Obama referred to ideals expressed by Lincoln about renewal, continuity and national unity. Obama mentioned these ideals in his speech to stress the need for shared sacrifice and a new sense of responsibility to answer America’s challenges at home and abroad.

Obama and others paid homage to Lincoln in the form of tributes and references during several of the events, starting with a commemorative train tour from Philadelphia, Pennsylvania, to Washington, D.C. on January 17, 2009. The inaugural events held in Washington from January 18 to 21, 2009, included concerts, a national day of community service on Martin Luther King, Jr. Day, the swearing-in ceremony, luncheon and parade, inaugural balls, and the interfaith inaugural prayer service. The presidential oath as administered to Obama during his swearing-in ceremony on January 20 strayed slightly from the oath of office prescribed in the United States Constitution, which led to its re administration the next day.

In addition to a larger than usual celebrity attendance, the Presidential Inaugural Committee increased its outreach to ordinary citizens to encourage greater participation in inaugural events compared with participation in recent past inaugurations. For the first time, the committee opened the entire length of the National Mall as the public viewing area for the swearing-in ceremony, breaking with the tradition of past inaugurations. Selected American citizens participated in the train tour and other inaugural events, and a philanthropist organized a People’s Inaugural Ball for disadvantaged people who otherwise would be unable to afford to attend the inaugural festivities. Among the celebrations for the inauguration, the committee hosted a first-ever Neighborhood Inaugural Ball with free or affordable tickets for ordinary citizens.

By definition, the inauguration marked the formal culmination of the presidential transition of Barack Obama that began when he won the United States presidential election on November 4, 2008 and became the President-elect. In accordance with Article I, Section 6 of the United States Constitution, Obama resigned from the United States Senate effective November 16, 2008. He was formally elected by the Electoral College on December 15, 2008.The results were certified by a joint session of Congress on January 8, 2009.

Obama, who originally campaigned using the slogan “Change We Can Believe In” and later “Change We Need”, was widely celebrated as the first African American president of the United States and a symbol of change from his Republican predecessor, George W. Bush. Obama also represented a generational change as the first man elected President who was born in the 1960s. He inherited what Peter Orszag termed an “economic mess” that became known as the late-2000s financial crisis. According to a CNN poll, he embodied youthful energy and transition at a time of economic despair, and inspired more confidence than his immediate predecessors.

The inauguration was planned primarily by two committees: the Joint Congressional Committee on Inaugural Ceremonies and the 2009 Presidential Inaugural Committee. Although the election was scheduled for November 4, 2008, the congressional committee began construction of the inaugural platform on September 24, 2008.
The swearing-in ceremony and the inaugural luncheon for President-elect Obama and Vice President-elect Biden were planned by the Joint Congressional Committee on Inaugural Ceremonies, a committee composed of United States Senators Dianne Feinstein, committee chair, Bob Bennett and Harry Reid, and United States Representatives John Boehner, Steny Hoyer and Nancy Pelosi. The committee is overseen by the U.S. Senate Committee on Rules and Administration.

The Joint Congressional Committee on Inaugural Ceremonies chose the inaugural theme, “A New Birth of Freedom”, a phrase from Abraham Lincoln’s Gettysburg Address from the Civil War era. The theme, which was selected by the committee to mark the inaugural occasion and honor the 200th anniversary year of Lincoln’s birth, expressed “Lincoln’s hope that the sacrifice of those who died to preserve the United States would lead to ‘a new birth of freedom’ for the nation.'” In his reliance on the inaugural theme, Obama wanted “to give Americans reassurance that today, as in Lincoln’s time, the country would find its way through any crisis”.
The congressional committee released the full schedule of the January 20 inaugural events on December 17, 2008.

The inauguration schedule referred to the President elect as “Barack H. Obama”, although Obama specified previously that he intended to use his full name for his swearing-in ceremony, including his middle name Hussein. Obama decided to use his full name “Barack Hussein Obama” to “follow the tradition, not trying to make a statement one way or the other” for the inaugural ceremony. During the election campaign, Obama’s detractors tried to use his middle name to imply falsely that he was a Muslim.

The District of Columbia City Council passed legislation to enable bars and restaurants to stay open around the clock to provide hospitality services to the inaugural festivities attendees. After reaching an agreement with the congressional committee, District of Columbia Mayor Adrian Fenty signed legislation to temporarily allow bars and restaurants to operate 24 hours during the weekend leading up to the inauguration, but with 4:00 am EST as the cut off for alcoholic beverage service.

The Hotel Association of Metropolitan Washington agreed to pay for extended train service provided by the Washington Metropolitan Area Transit Authority on January 19 to accommodate visitors attending inaugural events and workers providing support for those events.

The 2009 Presidential Inaugural Committee organized several other inauguration related events at the direction of the President elect and Vice President elect of the United States, such as the train ride, concerts, parade, balls and prayer service. The co-chairs of the committee were William Daley, Penny Pritzker, John Rogers, Patrick Ryan and Julianna Smoot.

For the first time in history, the Presidential Inaugural Committee opened the full length of National Mall, which extends from the United States Capitol to the Lincoln Memorial, as the public viewing area for the swearing-in ceremony. The presidential committee set aside a section of the mall close to the U.S. Capitol for people holding reserved tickets for the inaugural event.

The committee directed the opening of the entire National Mall to make the event “‘the most open and accessible in history,’ allowing those who [could not]get the [reserved]tickets to the swearing-in ceremony on the Capitol grounds to fill the mall”. To enable people in attendance to see and hear the swearing-in ceremony, the committee arranged for placement of JumboTrons at points along the entire mall.

Despite criticism that such a large event could not be carbon-friendly, the presidential committee incorporated environment-friendly measures in its planning of the inaugural events. The environmental measures included the use of recyclable carpet for the platform, retrieval of recyclable items from outdoor areas after an event, and the use of recycled paper for invitations and inaugural ball tickets.