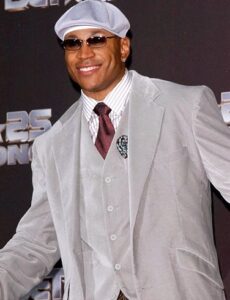 -KNOWN FOR HIS HIP HOP HITS: “I can’t Live Without My Radio, I’m Bad, the Boomin System, Rock The Bells, Mama Said Knock You Out and Doin It, I Need Love, Around the Way Girl and Hey Lover.”

-Appeared in numerous movies: In Too Deep, Any Given Day, S.W.A.T., Mindhunters and Edison

– L.L. Cool J won the Grammy Award for Best Rap Solo Performance in 1991 for Mama Said Knock You Out and in 1996 for Hey Lover.

-Smith first appeared as a rapper in the movie Krush Groove

-His first acting part was a small role in a high school football movie named Wildcats.

-Smith continued to pursuing acting and landed his own television sitcom, In The House.

-He has also published four books, including his autobiography “I Make My Own Rules” (1998).

Smith is currently starring in a series on CBS as a Special Agent, Sam Hanna, NCIS-Los Angeles.