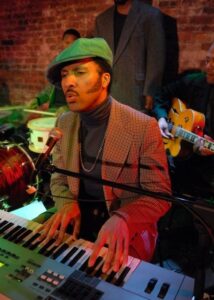 January 13, 1979 Donny Edward Hathaway, R & B singer, died. Hathaway was born October 1, 1945 in Chicago, Illinois. He began singing in a church choir at the age of three billed as “Donny Pitts, The Nation’s Youngest Gospel Singer.” He also began studying the piano as a child and in 1964 earned a fine arts scholarship to Howard University.

Hathaway left Howard in 1967 and began working as a songwriter, session musician, and producer. He recorded his first single in 1969 and released his first album, “Everything is Everything,” in 1970.

In 1972, Hathaway recorded an album of duets with former Howard University classmate Roberta Flack which included the track “Where is the Love” which peaked at number five on the Billboard Pop Charts and won the Grammy Award for Best Pop Performance by a Duo or Group with Vocals.

Hathaway and Flack were again successful with the 1978 duet “The Closer I Get to You.” Other recordings by Hathaway include “The Ghetto – Pt. 1” (1970), “Giving Up” (1972), and “Someday We’ll All Be Free” (1973). Despite his success, Hathaway was diagnosed as suffering from paranoid schizophrenia which apparently led to his suicide.

In 2008, a collection of poems on Hathaway, “Winners Have Yet to be Announced: A Song for Donny Hathaway,” was published.