Trending
You are at:Home»365 DAYS-OF-HISTORY»January 12 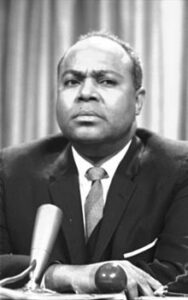 January 12, 1920 James L. Farmer, Jr., civil rights activist, was born in Marshall, Texas. Farmer was a child prodigy and at the age of 14 he was attending Wiley College and participating on the debate team that was portrayed in the 2007 film “The Great Debaters.” Farmer earned his Bachelor of Science degree from Wiley in 1938 and his Bachelor of Divinity degree from the Howard University School of Religion in 1941. In 1942, Farmer co-founded the Committee of Racial Equality, later renamed the Congress of Racial Equality (CORE), to bring an end to racial segregation through active nonviolence. He served as the national chairman until 1944. In 1961, he organized the Freedom Rides, which eventually led to the desegregation of inter-state busing in the United States. In 1975, Farmer co-founded Fund for an Open Society with a vision of a nation in which people live in stably integrated communities and where political and civic power is shared by people of different races and ethnicities. He led that organization until 1999. In 1985, he published “Lay Bare the Heart: An Autobiography of the Civil Rights Movement” and in 1998 he was awarded the Presidential Medal of Freedom, the nation’s highest civilian honor, by President William Clinton. Farmer died on July 9, 1999.