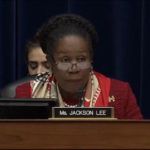 January 12, 1950 Sheila Jackson-Lee, congressperson, was born in Queens, New York. Jackson-Lee earned her Bachelor of Arts degree in political science from Yale University in 1972 and her Juris Doctorate degree from the University of Virginia Law School in 1975. In 1987, she was appointed a municipal judge and in 1989 was elected to the Houston City Council, the first African American woman elected to the council. In 1994, she was elected to the United States House of Representatives. She serves on the Judiciary Committee, where she focuses on issues such as civil rights and abortion rights, and the Homeland Security Committee.

She is currently the U.S. Representative for Texas’s 18th Congressional District and has served since 1995. The district includes most of central Houston. Jackson Lee made three failed attempts at local judgeships before becoming a municipal judge in 1987, lasting until 1990. Although in 1989 she won the at-large position for a seat on the Houston City Council, serving until 1994. As City Council member Jackson Lee helped pass a safety ordinance that required parents to keep their guns away from children. Also, she worked for expanded Summer hours at the city parks and recreation centers as away to combat gang violence.

In 1994, Jackson Lee challenged four-term Democratic incumbent U.S. Congressman Craig Washington who had come under-fire for opposing several projects that would have benefited the Houston area. Jackson Lee defeated Washington in a rout by taking 63% to Washington 37%. This victory was an empowering election in this heavily Democratic, Black-majority district. In the general election she defeated Republican nominee Jerry Burley.

It was reported that in October 2010 Jackson Lee was “asking the Department of Justice to investigate whether tea party groups are intimidating black and Hispanic voters in her district.” She requested that Attorney General Eric Holder send poll monitors to make sure that a local group wasn’t stopping people from voting. She won the general election with 70 percent of the vote, the lowest winning percent of her career.