Trending
You are at:Home»365 DAYS-OF-HISTORY»January 11 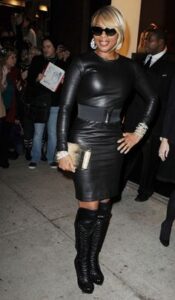 January 11, 1971 Mary Jane Blige, singer, record producer and “Queen of Hip Hop Soul,” was born in The Bronx, New York. Blige spent her early years in Savannah, Georgia where she sang in a church choir. In 1989, she was signed by Uptown Records, becoming the label’s youngest and first female artist. In 1991, the album “What’s the 411?” was released including several singles that topped the R&B singles chart. The album sold more than three million copies. Subsequent albums include “My Life” (1994), “Mary” (1999), “No More Drama” (2001), “Stronger with Each Tear” (2009), and “My Life II…….The Journey Continues (Act 1)” (2011). Blige has won nine Grammy Awards, including the 2007 Grammy for Best R&B Album for “The Breakthrough” and the 2009 Grammy for Best Contemporary R&B Album for “Growing Pains.” She has sold over 50 million albums worldwide. She also has endorsement contracts with a number of major corporations including Reebok, Coca-Cola, American Express and Chevrolet. In 2008, she founded the Foundation for the Advancement of Women Now to inspire women from all walks of life to reach their individual potential and opened the Mary J. Blige Center for Women in Yonkers, New York.