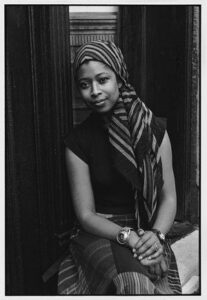 Alice Malsenior Walker was born February 9, 1944 became accomplished as an American novelist, short story writer, poet, and activist. She wrote the critically acclaimed novel The Color Purple (1982) for which she won the National Book Award and the Pulitzer Prize for Fiction. She also wrote the novels Meridian (1976) and The Third Life of Grange Copeland (1970), among other works.

Walker was born in Putnam County, Georgia, the youngest of eight children, to African-American sharecroppers Willie Lee Walker and Minnie Lou Tallulah Grant. Her father, who was, in her words, “wonderful at math but a terrible farmer,” earned only $300 ($4,000 in 2013 dollars) a year from sharecropping and dairy farming. Her mother supplemented the family income by working as a maid. The family also had Native American ancestry, which Walker drew from in her writing and spirituality. Minnie Lou worked 11 hours a day for $17 per week to help pay for Alice to attend college.

Living under Jim Crow laws, Walker’s parents resisted landlords who expected the children of black sharecroppers to work in the fields at a young age. A white plantation owner said to her that black people had “no need for education”. Minnie Lou Walker, according to her daughter, replied “You might have some black children somewhere, but they don’t live in this house. Don’t you ever come around here again talking about how my children don’t need to learn how to read and write.” Her mother enrolled Alice in first grade when the girl was four years old.

Growing up with an oral tradition, listening to stories from her grandfather (who was the model for the character of “Mr.” in The Color Purple), Walker began writing, very privately, when she was eight years old. “With my family, I had to hide things,” she said. “And I had to keep a lot in my mind.”

In 1952, Walker was accidentally wounded in the right eye by a shot from a BB gun fired by one of her brothers. In 2013, on BBC Radio’s Desert Island Discs, she said the act was deliberate but she agreed to protect her brother against their parents’ anger if they knew the truth. Because the family had no car, the Walkers could not take their daughter to a hospital for immediate treatment. By the time they reached a doctor a week later, she had become permanently blind in that eye. When a layer of scar tissue formed over her wounded eye, Alice became self-conscious and painfully shy. Stared at and sometimes taunted by other children, she felt like an outcast and turned for solace to reading and to writing poetry. When she was 14, the scar tissue was removed. She later became valedictorian and was voted most-popular girl, as well as queen of her senior class, but she realized that her traumatic injury had some value: it had allowed her to begin “really to see people and things, really to notice relationships and to learn to be patient enough to care about how they turned out”.

After high school, Walker went to Spelman College in Atlanta on a full scholarship in 1961 and later transferred to Sarah Lawrence College in New York, graduating in 1966. Walker was strongly affected by becoming pregnant and having an abortion in the summer of 1965 before her senior year of college. She became severely depressed and determined to commit suicide. She struggled out of this experience by writing poems, which were published as Once (1968), her first book of poetry.

Walker became interested in the Civil Rights Movement in part due to the influence of activist Howard Zinn, who was one of her professors at Spelman College. To continue the activism of her college years, Walker returned to the South from New York. She participated in voter registration drives, campaigns for welfare rights, and children’s programs in Mississippi.

On March 17, 1967, Walker married Melvyn Roseman Leventhal, a civil rights attorney who was also working in Mississippi. They married in New York City, as their inter-racial marriage was then illegal in the South. They had a daughter Rebecca together in 1969. During this period, Walker also worked as writer-in-residence at Jackson State College (1968–69) and Tougaloo College (1970–71), and was a consultant in black history to the Friends of the Children of Mississippi Head Start program.
Walker wrote the poems of her first book of poetry, Once, while she was studying in East Africa and during her senior year at Sarah Lawrence College. She took a brief sabbatical from writing while working in Mississippi in the civil rights movement.

Walker resumed her writing career when she joined Ms. Magazine as an editor. In 1973, Walker and fellow Hurston scholar Charlotte D. Hunt discovered Zora Neale Hurston’s unmarked grave in Ft. Pierce, Florida. The women chipped in to buy a modest headstone for the gravesite. Walker’s 1975 article “In Search of Zora Neale Hurston”, published in Ms. Magazine, helped revive interest in the work of this African-American writer and anthropologist. Walker was inspired by Hurston, whose work and life influenced her subject matter.

In addition to publishing her collected short stories and poetry in 1970, that year Walker published her first novel, The Third Life of Grange Copeland. It explores the life of Grange Copeland, an abusive, irresponsible sharecropper, husband and father. In 1976, Walker’s second novel Meridian was published. Meridian is a “semi-autobiographical narrative based upon Walker’s experience in the 1960s… [it]is her retrospective on the social, racial, and sexual upheavals that the Civil Rights and Black Power eras produced.” The novel dealt with activist workers in the South during the civil rights movement, with events drawn closely parallel to some of Walker’s own experiences.

In the late 1970s Walker moved to northern California. In 1982, she published what has become her best-known work, The Color Purple. The novel follows a young troubled black woman fighting her way through not just racist white culture but patriarchal black culture as well. The book became a bestseller and was subsequently adapted into a critically acclaimed 1985 movie directed by Steven Spielberg featuring Oprah Winfrey and Whoopi Goldberg, as well as a 2005 Broadway musical totaling 910 performances.

Walker is the co-founder of Wild Tree Press, a feminist publishing company in Anderson Valley, California. She and fellow writer Robert L. Allen founded it in 1984.

Walker has written several other novels, including The Temple of My Familiar and Possessing the Secret of Joy (which featured several characters and descendants of characters from The Color Purple). She has published a number of collections of short stories, poetry, and other writings. Her work is focused on the struggles of black people, particularly women, and their lives in a racist, sexist, and violent society. Walker is a leading figure in liberal politics.